A few times each year, the SHA Technology Committee hosts Tech Week, an entire week devoted to certain technologies used in historical archaeology. This week, archaeologist Duane Quates was asked to gather blog posts about the use of technology in mortuary analysis.

Fort Drum, New York has a surprisingly rich history and the 13 historic cemeteries of Fort Drum are a profound reminder of the communities that existed prior to the Army’s acquisition of the now 107,000 acre military reservation in 1941. Current technologies such as LiDAR, GIS, database management software, and geophysical technologies, such as ground penetrating radar, magnetometry, and electrical soil resistivity are providing the base archaeologists with innovative tools to understand and mange these resources responsibly. 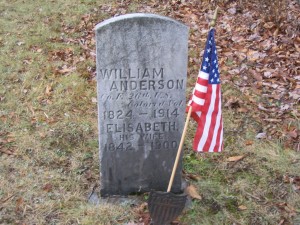 Figure 1: The grave of William Anderson and his wife Elizabeth

One of the many aspects of the cemeteries that I found interesting is that there are only two known African American gravestones out of 1802 known burials. One grave is that of William Anderson and his wife Elizabeth located in the Gates Cemetery near Historic Sterlingville. The second is that of Rachel, a former slave of James Leray, in the Sheepfold Cemetery. The graves in both of these cemeteries are very similar in that they are alone in the back of the cemetery, segregated from the rest of the burials.

Unfortunately the archaeological record of the base is very similar in its representation of the African American community. To date, the Cultural Resources Program at Fort Drum has identified 962 sites on the 107,000 acre military reservation. Over 65% of the recorded sites are historic. However, only two known sites are considered to have an African American component; the LeRay Mansion Slave Quarters and the Whitney Farmstead. The first is associated with James LeRay de Chaumont, a French capitalist and land speculator, whose family fortune was acquired largely from the transatlantic slave trade. The second is associated with a 19th century farmstead that, unfortunately, is poorly understood. This assemblage includes trade beads from Gambia, West Africa, as well as Lamoka points from the late Archaic Period.

The Fort Drum Cultural Resources Program manages and maintains the cemeteries of the post. Rachel’s marker is one that has given us the most concern. It is made of a poor quality marble that has frost fractured several times. Each time the Fort Drum Cultural Resources Program has repaired it with epoxy but unfortunately time and weather has taken its toll on the stone. The epitaph is no longer fully legible. 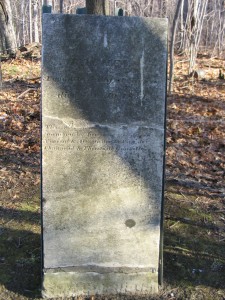 Figure 2: The grave of Rachel

In April 2010 at the Society for American Archaeology meeting in Sacramento, CA, while perusing the book room, I met Bill Mongon of Accurex, Inc. in the technology section of the book room. He was demonstrating a multi-lens camera that was capable of building a 3D model of almost any object. What I found fascinating was the system’s capability of finding minute details on objects that were not detectable by the naked eye. I asked if there were any field applications for the device. Bill suggested that he travel to Fort Drum and provide a demonstration by scanning Rachel’s grave stone. The demonstration at Rachel’s grave site went beautifully. The system performed perfectly in spite of a continual rain that drenched us. Fortunately, scanning Rachel’s grave stone took only 2 hours. 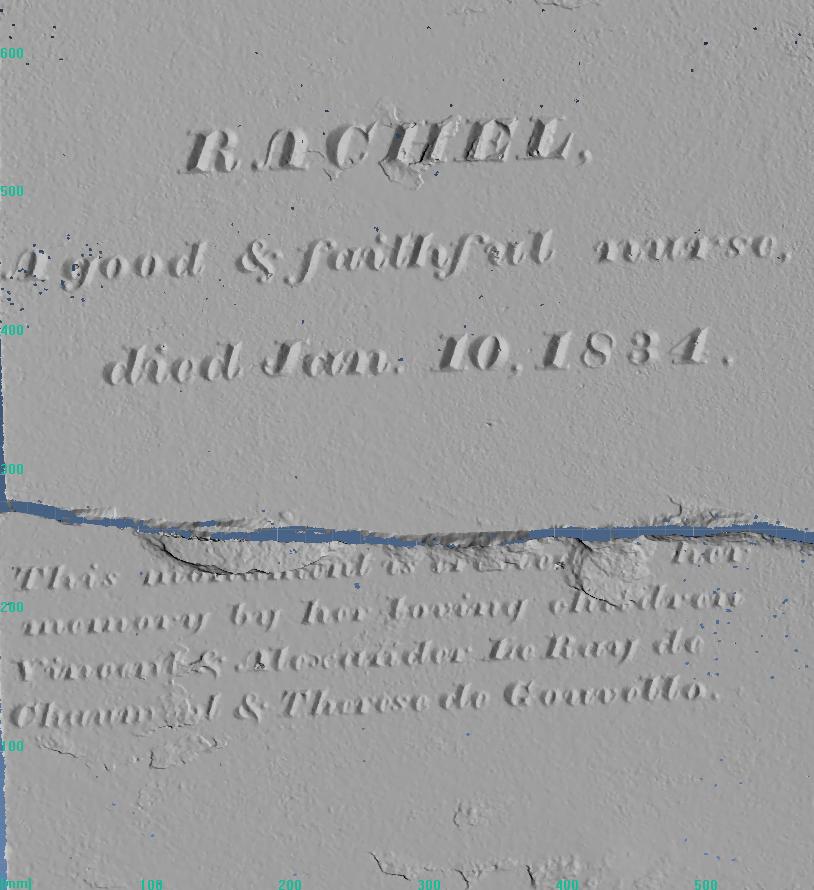 In figure 3 the epitaph is very clear, which reads: “Rachel A good & faithful nurse. Died Jan. 10 1834.” The lower epitaph reads “This monument was placed in her memory by her loving children Vincent & Alexander LeRay de Chaumont & Therese de Gouvello.” Ironically, one year after this scan was done, while giving a tour of the cemetery I found the grave stone broken into several pieces by a large oak tree that had come down in a wind storm. Fortunately, we have the 3D scan of the stone allowing us to replicate it.

In 2010, the Cultural Resources Program at Fort Drum embarked on a new project to answer several pressing concerns about the cemeteries. First, we suspected that there were unmarked graves surrounding the two known African American grave markers. Military training had the potential to encroach upon the boundaries of the Sheepfold Cemetery where Rachel lies, with the new development and expansion of nearby training course. It was necessary to know, with absolute certainty, whether the boundary of the cemetery was accurate or if there were burials outside of the fence. Second, we also wanted to make a concerted effort to find whether there were other African American graves in the other cemeteries on the base.

To answer these questions, an inventory of our cemeteries was necessary and then the attributes could be compared. Once that was completed and the African American graves identified, geophysical surveys would be conducted in the vivinity. Unfortunately, the staff did not have the expertise or training needed to perform the geophysical surveys. Fortunately, I was able to acquire funding to hire an intern, Mike Sprowles, through the Oak Ridge Institute of Science and Education (ORISE) to complete the project.

Mike started the project by creating a database and developing the attributes that he intended to record. The database became something more than what was originally intended. His database can compare attributes of all 1802 burials and search for similarities. It also has the capability of tracking the conditions of each stone and is a perfect tool to manage the cemeteries. Finally, it is searchable by name and can be used by any member of the public for genealogical research. He finished the inventory in just 10 months and we publicly launched the database as a genealogy tool in October of 2012. He has surveyed both the Gates cemetery and the Sheepfold cemetery and found several anomalies consistent with unmarked burials near Rachel’s grave stone.

But I digress. I will let Mike explain this project in his own words in his blog post. Also, the Tech Week Blog will feature Dr. Michael Heilen of Statistical Research Inc., discussing the Alameda-Stone Cemetery in Tucson, AZ, as well as Katy Meyers, PhD. Candidate at Michigan State University, with her post on the spatial analysis of the Mount Pleasant Cemetery in Livingston County, New York. These posts have several things in common. All discuss the use of GIS and databases in their analyses. However, each is unique in how they demonstrate the advantages of these technologies in cemetery studies. The thing that excites me about archaeology’s use of technology is the surprising results one gets when applying various techniques to a particular problem. Technology has a way of finding answers to questions that you never intended to ask.

Read the First Post in this week’s Tech Week: “Examining Space of a Resting Place: GIS of a New York Cemetery” by Katy Meyers.

Related Posts
Ethics: Who Decides?
Ethic – n. rules of behavior based on ideas about what is morally good and…
From the Society for Historical Archaeology’s Governmental Affairs Counsel
SHA Members’ Congressional Visits Thanks to those of you who participated in Cultural Heritage Partners’…
“Historical Bioarchaeology” – A new thematic collection to be published in Historical Archaeology
We are happy to announce the next issue of Historical Archaeology will be arriving in your mailboxes…