Place is important. As Brydon says in the movie “The Trip”, place allows you to create a mark and leave something tangible behind in your memory, but it also puts a responsibility upon the mourning community. Place gives us a sense of belonging, a heritage and ancestry, and a deeper connection to our surroundings. Burials are the final statement of place that humans get to make- for themselves through wills, for their loved ones, or even for their enemies in battle. Both the manner of the burial, memorial and the place are important.

The memorials of the deceased reflect the historical present in which they were buried. Grave markers, location of burial and epitaphs all follow trends that help us better interpret what was of social importance during these periods. Due to the high emotion of death, the trends associated with burial are usually slow to change and have high social significance. Examining the patterns of grave markers and epitaphs aids in creating more nuanced interpretations of how individuals wanted to memorialize and remember their relatives, and also how these patterns changed through time.  As Cannon (2002:191) argues: “the growth and transformation of these expressions over time can therefore be read as a historical narrative of individual choices made in response to spatial representations of the immediate past and perceptions of current and anticipated social and political circumstances”.

A geographic information system (GIS) is a computer based program that allows us create spatial maps in order to visualize, analyze, and interpret data to reveal patterns. Spatial data (data with longitude and latitude, or other geographic coordinates) is given attribute data (any information about the spatial points such as type of grave marker, date of death, name of individual buried within), and is input into GIS. The program has a number of statistical and spatial tools that allow us to analyze the spatial patterns of the associated attributes. An example would be examining whether individuals near to one another were died in similar years. By using GIS, we can better analyze historic cemeteries to understand the importance of place in both the deceased and mourning communities. 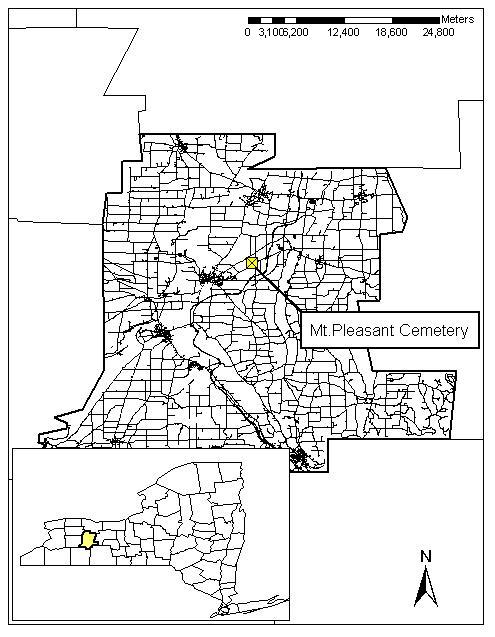 The Mount Pleasant Cemetery is approximately an acre in size, and located off Interstate 390 and Route 20A in Livingston County, New York (Figure 1). It is one of ten cemeteries registered to the town of Geneseo, a small farming community established in 1790. The Mount Pleasant Cemetery was established in the early 1800’s by the Kelly Family, and was the first cemetery for Presbyterians in the area. The original date of origin is unknown, though newspaper clippings from the 1850’s note that it was already well established by then. From an outsider perspective, the cemetery appears to have a random organization, lacking distinct rows and coordinated orientations to cardinal directions. In order to better interpret one of the early cemeteries of this small New York community, GIS was employed.

Each grave marker was spatially located using GPS, and attribute data was taken. Stones were first given a ranking of primary through quaternary. It was immediately apparent upon collecting the data that stones fell into a number of categories based on ancestry. Most of the plots within the cemetery were small and consisted of one large grave marker with the family name, and then a number of secondary, tertiary and quaternary stones in increasing distance from the primary marker. The primary stone included the main family stone only, usually found at the center of the plot with the patriarch’s name and death date highlighted, and other family members listed below. Secondary markers were smaller and usually lacked personal names, instead noting only familial relationship to the patriarch. Tertiary and quaternary markers were often different in style, material, and contained more information such as name and death date. Style of grave marker was also noted, and included obelisk, column, mausoleum, pulpit, tablet and flush. Family name, epitaph and death date were also recorded. In total, 34 family plots and 265 grave markers were mapped and assigned attribute data on ranking, style, and dates (Figure 2). 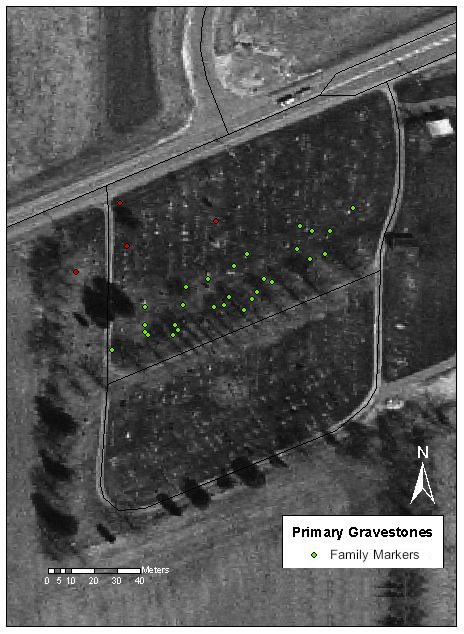 The presence of these large family memorials and lack of personal names reveals the high importance of family. Due to this, the analysis using GIS was employed to determine whether distance to the family marker correlated to dates or relationship, and whether space within each plot had specific organization. Both nearest neighbor and Moran’s I was employed. Neither revealed any strong correlation between the rank of the stone, relationship of the person and distance to the primary family marker. Instead, the stone appear to have more random distribution within the family plot. This, however, does seem to be a common characteristic of this era and style of cemetery. As Mytum (2004:126) writes, “such memorials usually have no individual epitaphs or descriptors of any kind, and it would seem that after death all that mattered was familial association”. Other GIS studies such as Hoogendoorn 2007 found similar results, with stone organization being due to family relationship.

However, an analysis purely of style revealed that there were areas in the cemetery where specific styles of family markers were more popular than others. Further examination revealed this was related to date and shows the growth of the cemetery and change in the fashion trend. However, this correlation works for only the earliest date. The cemetery continues to be used, and families have maintained their connections with their 19th century ancestors. These newer stones, usually quaternary, have the names of the individual and their death date written on them rather than simply being noted on the family marker like the secondary or tertiary markers.

Place is important throughout our lives, and our final burial location is indicative of this importance. GIS is a powerful tool to allow us to find patterns and from these make interpretations of why communities chose to bury their loved ones in specific arrangements. It is interesting to watch this landscape change as we become more mobile, and people are less tied to their ancestral lands. It seems now that the place we find important, and one that may be our lasting memorial is more digital, such as Facebook pages for the deceased… but this is a conversation for another post.

Read the Second Post in Tech Week: “Application of Advanced Technologies in Excavation, Analysis, Consultation, and Reburial: The Alameda-Stone Cemetery in Tucson Arizona” by Michael Heilen

Hoogendoorn, Arie, Jeffrey C. Brunskill, PhD and Sandra Kehoe-Forutan
2007 “A Study of Spatial and Temporal Anomolies Associated with the Placement of Gravestones at McHenry Cemetery in Orangeville, Pennsylvania”. Poster presented at Middle States Division of the Association of American Geographers, Pennsylvania, November 2007.

Related Posts
Going Interactive Underwater
By Drew Fulton When you first tell people that you are going to spend a…
Workshops at the 2017 SHA Annual Conference – Fort Worth, Texas | January 4-7, 2017
Howdy folks! I hope that you’re surviving the crazy holiday season and looking forward to the…
Photographs into Models: Documenting the World Trade Center Ship
By Carrie Fulton If you attend any archaeology conference or glance through recent issues of…