In recent years, the technologies that have affected most how archaeologists do their work are digital and computing technologies. These technologies can greatly improve the accuracy, precision, and efficiency of archaeology as well as enhance our ability to analyze, share, and curate the data we generate. Of these tools, some of the most useful have been relational databases, geographic information systems, visualization tools, and digital mapping instruments, such as global positioning systems, total stations, and lidar.

A few years ago, I had the opportunity to participate in a large, highly complex, and community-sensitive excavation project in downtown Tucson, Arizona. The project was very important to Pima County—the project sponsor—the city of Tucson, and to multiple descendant communities. The project site was the location of the long-abandoned Alameda-Stone cemetery, a cemetery used by residents of the Village of Tucson beginning in the late 1850s or early 1860s. Divided into several sections, the civilian sections were closed to further burial in 1875, while the military section was closed in 1881. The 1,800 to 2,100 people buried in the cemetery were of diverse cultural and religious backgrounds, including individuals of Hispanic Catholic, Euroamerican Protestant, Jewish, Tohono O’odham, Yaqui, and Apache backgrounds, as well as military personnel.

After the cemetery was closed, a few hundred burials were moved to new cemeteries, but most were left in the ground. As Tucson urbanized and grew, buildings, streets, and utilities were built throughout the cemetery and all visible reminders of the cemetery were erased. Despite these disturbances, many of the burials remained intact when the cemetery was professionally excavated by Statistical Research, Inc. in 2006-2008.

To comply with legal requirements, including burial agreements for the cemetery excavation, all human remains and burial-associated objects within the 4.3 acre project area had to be recovered. The discovery of burials had to be reported daily and the location and status of all recovered items and materials had to be tracked throughout the duration of the project. Due to the large number of descendant groups who could claim remains from the cemetery, the cultural affinity of human remains and burial associated objects had to be established as firmly as possible using multiple lines of archival, contextual, and osteological evidence. Moreover, the project needed to be completed from beginning to end within a period of just four years. Most projects of this size are performed over a substantially longer time frame. 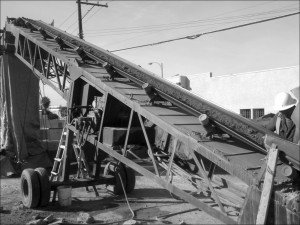 Figure 1. Use of a TEREX Powerscreen Mark II to recover artifacts and osteological materials from the project area overburden (image courtesy of SRI Press and Left Coast Press).

A variety of new technologies were used to accomplish these goals. Since all human remains had to be recovered, screening of the massive volume of cultural deposits, including overburden,  was necessary (Figure 1). Burial features were excavated by hand, but fragmentary remains were also present in secondary contexts in areas of the cemetery where burials had been disturbed. The recovery of these materials was accomplished using construction equipment and an automated screening machine. These tools required an operator to run and maintain, but their use greatly sped up the search effort and enabled all cultural deposits to be thoroughly screened.

To glean as much information as possible from exposed burials, burials were intensively documented in situ using photogrammetry and three-dimensional laser scanning, in addition to more traditional mapping techniques (Figure 2). Maps of burial features were then created in a geospatial laboratory using point-provenienced spatial data, orthorectified digital photos, 3-D scanning data, and analysis data. Recovered artifacts were stored and analyzed onsite and bagged using printed, bar-coded labels that allowed all recovered materials to be accurately provenienced and tracked throughout the project. 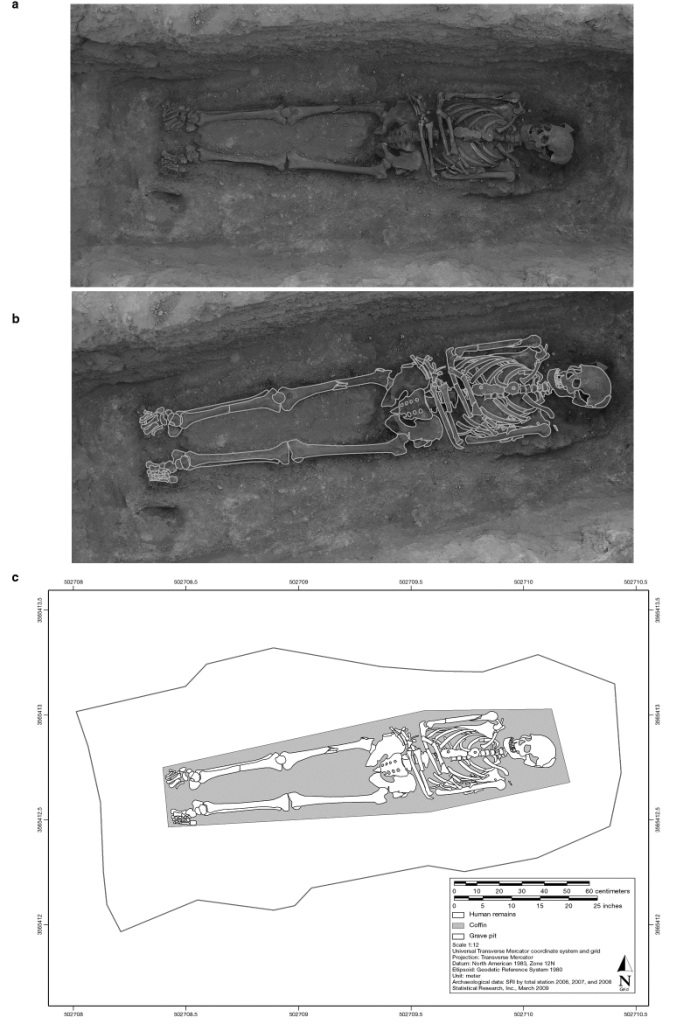 Excavation resulted in the intensive investigation of more than 1000 burial features and the recovery of the remains of more than 1300 individuals, making this one of the largest excavations of a historical-period cemetery conducted in the United States. Excavation also documented several prehistoric features predating the cemetery and more than 700 post-cemetery features, including building foundations, privy pits, utility trenches, and landscaping features. Use of the above technologies decreased field time considerably, making better use of field labor and allowing greater attention to be focused on analysis, reporting, and consultation efforts.

All the resulting data collected in the field and laboratory were stored in a sophisticated relational database system. The system allowed analysts to query and manipulate massive volumes of data in a flexible and consistent manner in support of diverse analyses and to differentiate remains according to cultural affinity, as required by the project burial agreement. In addition, the system provided a platform for tracking all the project materials from the moment they were discovered in the field until they were reburied or repatriated. As the project came to a close, the remains of more than 1300 individuals were repatriated or reburied. Advanced technologies continued to play a role in facilitating this stage of the project by ensuring that remains were repatriated and reburied correctly according to the wishes of descendant groups.

Of course, use of advanced technologies is not an alternative to solid, traditional research or careful project management. Much consideration and effort is needed to ensure that technologies are used appropriately and effectively. Many of the technologies implemented during the project require monetary investment to purchase or lease and, to implement them successfully, training or hiring of staff with specialized skills. Substantial computing resources are needed—including servers, networks, and software—and these have to be built, operated, and managed by skilled professionals. Archaeologists and other staff working on the project had to learn collectively how to make these technologies work together to answer research questions and fulfill project requirements. The project database and geographic information system had to be coordinated and continuously tested to make sure these systems were operating properly and analysts were working with the correct and most up-to-date data.

It was also important to ensure that the use of a technology did not take on a life of its own. Technologies are only useful insofar as they fulfill a need. Project leaders had to continually question how and whether a technology was successful in meeting a need of the project and to consider what could be done to improve performance. For a project of this size, which had as many as 70 people in the field at any one time and employed upwards of 150 people of diverse backgrounds and positions, project leaders had to manage positions as much as they managed people. People came and went over the course of the project, but the position they occupied always needed to be filled. Similarly, many computers, servers, and instruments were used over the course of the project. Some components failed or needed periodic maintenance, but the technology always had to be managed, monitored, and properly maintained.

Finally, many of the technologies used in archaeology today were not designed specifically to address archaeological problems. Substantial effort and planning can be needed to adapt technologies to archaeological needs and to develop systems and protocols for their use in an archaeological context. The unique requirements of the excavation project provided the rationale and funding for a large investment in advanced technologies, particularly those involved in mapping and database systems. Other projects could likely benefit from similar technologies but may not have the staffing or funding to invest in or manage them. What can the discipline do to foster the wider application of technology to archaeological problems and to promote broader access? Further, what are the most effective ways for archaeologists to share information on where technologies succeed, where they fail, and how they can be improved?

Related Posts
Will today’s graduate training in Historical Archaeology predict the future of digital research archives?
This post is part of the May 2012 Technology Week, a quarterly topical discussion about…
Workshops at the 2017 SHA Annual Conference – Fort Worth, Texas | January 4-7, 2017
Howdy folks! I hope that you’re surviving the crazy holiday season and looking forward to the…
Preservation Photography: Roles and Rules
By Karen Price There’s something about a photograph. Humans are visual and I think pictures…