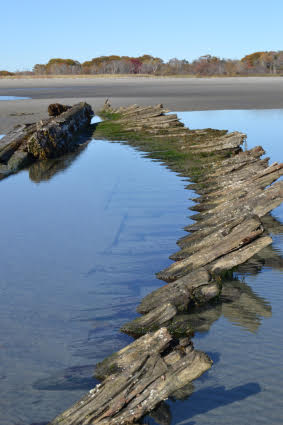 The archaeological remains of ships in the beach zone are part of a complex and dynamic system, being periodically exposed and reburied, they vary between being both visible and frequently forgotten features of the physical and cultural coastal landscape. These limited and nonrenewable resources play an important informational role as tangible pieces of maritime heritage that also document dynamic coastal processes. Shipwreck remains in the beach zone are highly susceptible to instability within the landscape. This instability in turn, affects decisions regarding importance and management strategies. The challenges to certain management strategies may result in these resources being damaged, ignored or forgotten, leading to a potential loss of pertinent social, economic, and physical information. Although little can be done to prevent natural coastal processes, a better understanding of them allows for their mitigation and management. Elements of the beach environment are common to all sites, but regional and local environmental conditions dictate certain challenges to management and the stability of the beached wreck resource. Sand movement, extreme storms, shoreline change (e.g. accretion and/or erosion), and the physical effects of climate change (e.g. sea level rise) may present both challenges and advantages to protection the beached wreck resource. 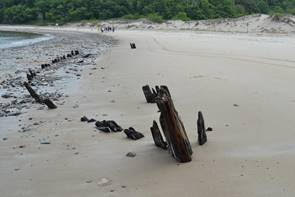 With the continued threat of sea level rise as a major component of climate change, many managing entities are focusing on sea level rise and climate change in their management plans, especially as environmental changes are already being seen in national parks and seashores. For example, climate change is considered “probably the biggest over-arching management issue that faces [Assateague National Seashore] with changing conditions” (Jones 2017). Although “steeped in politics” (Jones 2017) and varying perceptions of its occurrence, some managers see that subject of climate change as an opportunity to address the vulnerability of coastal cultural resources such as beached shipwrecks and get multi-agency support for monitoring and protection (Jones 2017). This requires a balance between the protection of the resources and their use, as well as the well-being of the public. In other words,

“…How are we going to get our visitors, our stakeholders to really appreciate and care about what’s happening on [barrier islands like] Assateague when other coastal communities…[are] going to be facing real issues with personal property and rising waters and coastal storms? Are people still going to care about these undeveloped natural areas [or cultural resources] along the coastline? I guess in the same breath, how can we make these [resources] contribute to the resiliency of those developed areas? We tend to think if we have a healthy barrier island system, we’re providing an ecosystem service or function as a protective barrier to the mainland communities. In the scenario of sea level rise and global climate change; how can we continue to increase the resiliency that we’re providing?” (Jones 2017)

The same can be considered of the cultural resources and its importance and maintenance in the cultural resiliency of coastal communities. If and when climate change and sea level rise continues to occur:

“…more and more we will see circumstances where we need to step in. Now what do you do? I think in most cases you have to look very carefully at what has been exposed, and what you do with it. In some cases, if it’s part of a regular program in which it’s monitored and….it has shifted a mile or half mile, then that information—tagging it, plotting it—helps better understand the site formation processes in that environment. It also gives us a sense of time if we continue to look at these, let’s say over the next 100 years, you can say this is what happened and from that draw inferences. In other places where [you] do an excavation in time…does it naturally follow, given the way we think it all works, that a 1600s wreck [for example] on the beach has gone, will be completely gone? Or would the archaeological survival, not just of the heavy stuff that sank further down, but more of the buoyant material floating somewhere in a matrix of sand and water? I think that’s the key. So consistently going out, checking, monitoring, responding to these things is important, but then making some decisions on what we’ve learned” (I-31).

“Can we learn from the beached shipwrecks as indicators of climate change? If we are finding more beached shipwrecks, is it because people are paying more attention or is it because physical processes (e.g. storm cycles, shoreline change, sea level rise) are changing (I-31)? In the end, nature is in change. Shipwreck sites are going to be exposed on beaches. They are going to break up in part. They’re going to shift around and move; that’s part of it, that’s part of the process. And if you can track it, monitor it, its’ not unlike in some ways…tagging of marine life…So to that end, I think the biggest impact then comes when people interfere with those processes” (Jones 2017). 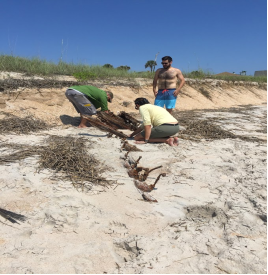 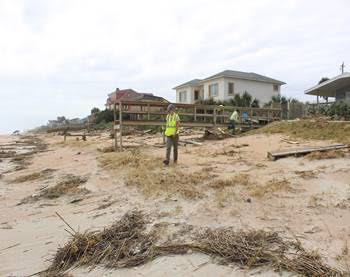 The resource’s link to climate change and shoreline change was also expressed by several of the managers, and the resource’s ability to provide environmental and physical information was becoming more important in data collection and management decisions. Along those lines, climate change is a growing concern for managers as well, in terms of both its effect on the resource and perceptions of its occurrence along the eastern seaboard. Although climate change denial is of regulatory concern for some managers, physical changes in shoreline and exposure of the resource are major considerations for effect on resource stability and how the resource can and will be managed as changes continue to occur. Most of the managers work on an ad hoc or case by case process, even within a larger regulatory framework. While some state and federal entities are preparing extensive plans for climate change (e.g. Maryland), most entities are still focused on a reactionary basis to issues of change and stability.

Additionally, as climate change continues to present effects along the coasts, indications of such change are essential to understanding these effects (e.g. shoreline shifts, extreme storms). As research begins to pick up speed looking at climate change and its relationship to archaeological resources, specifically terrestrial—and more recently underwater—coastal archaeological features must be added to this discussion. As embedded features within the coastal landscape, beached shipwrecks stand to contribute to the discussion on climate change. These resources, if monitored and documented over time, can expose both short- and long-term fluctuations in beach and dune systems, storm cycles, and other coastal processes. Along those lines, potential research into the effect of the beached shipwreck on the stability of the landscape is warranted. For example, a recent discovery on Reedy Island, Delaware shows probable use of a beached wreck as a breakwater on the island (Mastone 2017, pers. Comm). Along with the considered use of beached wrecks in the dunes during the WPA/CCC era in North Carolina, these we as well as other examples show the potential for examining the effects of the resource on providing stability to the beach and dune systems. 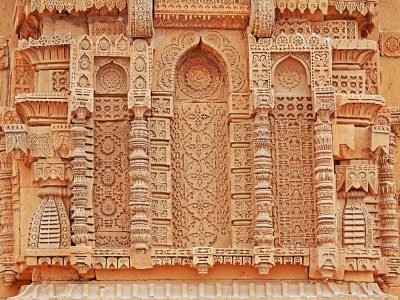