In 2014 as a new employee of Delaware State Parks, I was charged with reactivating the Time Traveler volunteer archaeology program (https://destateparks.com/Programs/TimeTravelers). I knew from the outset that rebooting a program that had been idle for at least a decade was not something I could do by myself. I needed to develop a brand for the program, get buy-in within my agency, and find partners with whom I could develop relationships that would leverage the meager resources available to me. I offer my experiences as a case study in building public archaeology partnerships.

Part of the branding effort was development of a visual identity for the program. I worked with our Creative Services group in developing a new Time Travelers logo that reinforced the connection to State Parks that had been missing in the logo created in the mid 1990s.

Delaware State Parks is a 67-year old organization managing over 20 parks, preserves, and natural areas totaling about 400,000 acres. Like most organizations, there are many fiefdoms, and turf is carefully guarded, sometimes extremely carefully guarded. Accordingly, I recognized that internal partnerships were going to be very important, and my boss and I met with the Chief of Interpretation and with Chief of Volunteer and Community Involvement as soon as I had some notion of what I wanted to do with the Time Traveler program.

In these meetings, my boss stressed that revival of the Time Traveler program was a priority that upper management had endorsed when filling my position. To the interpretive program I pitched the idea of Time Travelers as a branding for public outreach/education events and activities in State Parks with a cultural heritage focus. With the hope that such activities and events would serve as a recruitment gateway for potential volunteers, I committed to doing public talks and other programs on a regular basis. While there is a Chief of Interpretation in State Parks’ central office, interpretive programming in the parks is initiated and scheduled by Interpretive Managers and staff in each park. I was invited to introduce myself and pitch the Time Traveler concept at quarterly meetings of the interpretive staff, and I found enthusiastic supporters in several parks with whom I developed presentations for the general public and summer day-camps. Positive responses from the public to the programs developed with those initial contacts has led to interest from other park units and the development of additional programs. I’ve also reached out to local historical societies and metal-detector clubs and have presented programs to their members, gaining a few new potential volunteers each time I speak. 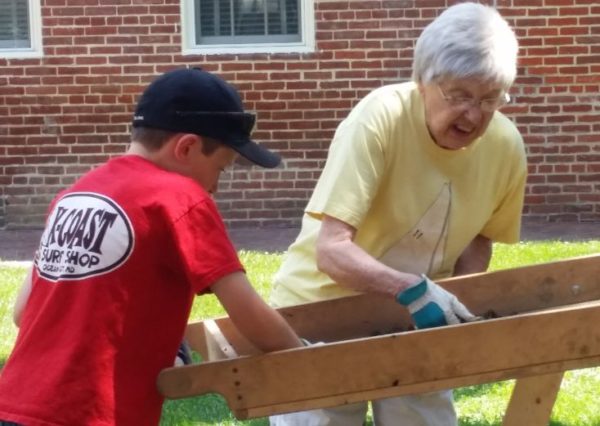 Our chief of volunteer programs immediately embraced the concept and paid for the printing of 2,500 logo stickers and 100 embroidered patches out of his budget. He recently paid for a second order of sticker and patches. He also worked with me to develop a position description for archaeology volunteers and an online application form, integrated with the systems he had previously developed. 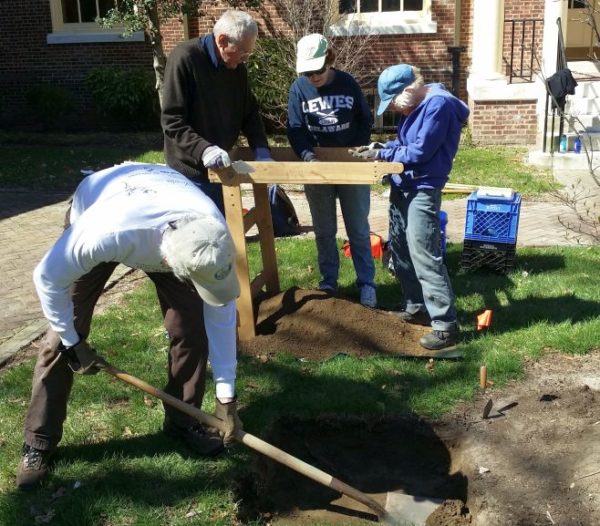 Looking outside the agency, I first reached-out to the Archaeological Society of Delaware (ASD) who had been running a successful excavation at a 17th-century historical site near Rehoboth Beach for several years. In exchange for access to their emailing list of over 100 members, I sold my soul and became the new treasurer of the ASD, a position that I suspect I may end up holding for life. In our first Time Traveler field projects veteran ASD members made up most of the teams, but not exclusively so, and the experienced hands were paired with those having little to no experience. I continue to have a close relationship with the ASD, and the ASD has helped staff and fund a number of events and activities.

Delaware has two state-recognized Native American groups: the Nanticoke Indian Association and Lenape Indian Tribe of Delaware. There are no federally-recognized tribes resident in the state. I reached out to both tribes initially via email, and when that was not successful with the Nanticoke, via telephone. While I was easily able to make contact with the leadership of the Lenape and meet with them, attempts to contact the leadership of the Nanticoke have proven more difficult and will apparently require face-to-face introduction by someone known to and trusted by the Tribe. This has yet to happen, but I think I have found someone willing and able to make that introduction.

My initial goal in contacting the tribes was to explore their attitudes toward archaeology and interest in potential research projects. The Lenape’s Chief Dennis Coker was cautious positive in his reaction, having had in the past both positive and negative experiences with professional archaeologists, but our conversations were positive overall and lead to a partnership among ASD, the tribe, and State Parks to put on a festival event called Native Ways. I began to meet regularly with the Lenape Tribe’s Outreach Committee, a group run by respected female members of the Tribe, and they are now enthusiastic in their support for archaeology.

The Native Ways event was held in the Fall of 2016 and 2017, presenting native spirituality, foodways, and technologies presenters at stations where the public could interact with the presenter and try their hand at many skills, including cordage making and atlatl-assisted spear throwing. The 2017 event grew to two days with good public attendance. Changes in staffing at the park where the event was held, however, resulted in the event not being able to be held since, but we are planning shorter programs focused on particular craft activities, such as pottery-making, and I have presented a talk on regional prehistory as part of each year’s Lenape Heritage Month (September) for the last four years.

In reviving the Time Traveler volunteer program, I found it useful to redefine its mission and the brand of the program. It was also vital to get internal buy-in for my program objectives and develop external partnerships with groups with whom my program shares a similar mission and goals. The success of such relationships is in addressing some need of all those involved, but can draw on the resources of each to build capacity and achieve outcomes that would be otherwise impossible.

Tagged with: public archaeology
Related Posts
Digging our own graves? A suggested focus for introducing archaeology to new audiences
As an Outreach Coordinator for the Florida Public Archaeology Network, I often get to work…
Maryland Archaeology and the Certified Archeological Technician Program
Citizen-scientists didn’t just dominate Maryland archaeology until the 1960s…they were Maryland archaeology. But, as in…
National Archaeology Day 2012
On Saturday, October 20, 2012 archaeology enthusiasts will have a chance to  participate in a…