Coastal cultural resources provide crucial links to the past and are important centerpieces for interwoven maritime heritage community narratives, and are valuable cultural resources. Similar to many other places in the world, in southeastern NC, natural and environmental factors have caused damages to, and continue to threaten, cultural heritage in different ways. The major factors threatening North Carolina’s coast are sea level rise, the recurring annual danger of storm surges during hurricane season, and floods from heavy rain events. In this area, Brunswick County is considered as one of the most exposed and vulnerable shorelines, with some of the most significant cultural heritage sites.

Since one of the major concerns is the impact of sea level rise on cultural resources in long term, here the sea level rise risk map for Cape Fear Area is presented [Fig. 1] (For more information refer to: Dynamic coasts and immovable cultural resources: an assessment of the impact of natural—environmental factors on coastal cultural resources, Journal of Marine and Island Cultures, Vol. 6: 2:3).  Although in some cases the water might not reach the sites or cause inundation, the proximity of these sites to water will increase the risk of by penetration of salt-water into these entities, which increase the risk of material and structural erosion. 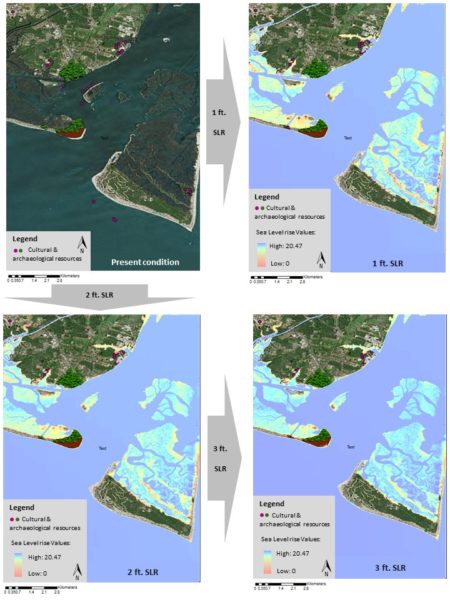 This site is an old wooden boathouse, listed as a National Historic Place, associated with fishing and boatbuilding, which have made a significant contribution to the broad patterns of history. “Bald Head Creek Boathouse is a surviving member of a series of structures erected beginning in the late eighteenth century that signified efforts to provide safe ship passage in this treacherous stretch of the North Carolina coast.” This site is one of the most popular paintings and photographic scenes on the island and it is a registered site. However, the building is standing on wooden pilings in tidal marsh, which suggests that the stability of the building is questionable. The comparison between the pictures taken at the time of its registration form preparation (1997) with recent pictures (2015) shows the extent of its deterioration in about three decades [Fig. 2a & 2b]. In addition, considering the location of this building in lowland areas of Baldhead Island and the projection of sea-level rise and storm surge data, this building is in imminent risk of damage. The Creek Boathouse would be affected by one-foot sea-level rise scenario, which is the minimum predicted sea-level rise scenario. 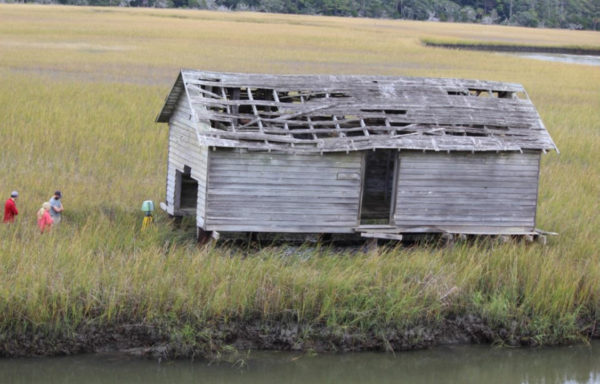 Fig. 2a: Aerial image showing deterioration of the roof structure of the boathouse   (Photo by: Lynn Harris)

Brunswick Town was one of the most prominent ports and political centers in the 18th century. The site comprises historic houses and ruins, and remains of the port and wharves. Cape Fear River experiences hydrological floods, which is a peak in river discharge following rain or snowmelt, and causes erosion along the river shoreline. Jim McKee, historic interpreter for the Brunswick Town State Historic Site, stated that since 2010, due to the Cape Fear’s flooding and strong water flow, the banks of the river are constantly eroded, which results in the exposure of more wharves [Fig. 3]. Superimposition of this site on the risk maps shows that this site can easily be affected by one-foot sea-level rise scenario. The existing data shows that seasonally, there will be more severe river current and flood in the riverbank, which will result in more erosion and loss of material and structure.

Fig. 3: Images show different sections of Brunswick Town along the Cape Fear River, where the impact of water flow clearly altered the sites and caused exposure of some artifacts and destruction in some sections. ©The State Archaeology Office, Photo courtesy: John Mintz.

Assessment of the state of existing cultural heritage sites, buildings and their structures will help to analyze the impact of different factors more accurately. The two mentioned case studies are example of a few fairly well documented sites and structures, with existing information about their present condition. Nevertheless, not all the cultural-archaeological entities cover the information about their structures and materials, which is necessary for decision-making. Therefore, using risk maps is the first step to highlight probable major factors that possibly affect cultural resources, not the extent and exact form of impact. For a proper mitigation and protection of cultural properties, a better understanding of the nature of cultural properties, their state of preservation, their susceptibility to salt and fresh water penetration, their materials and structural stability is required.

Related Posts
Response to Eric Cantor and Lamar Smith
Many of you know that Representatives Eric Cantor (R-Virginia) and Lamar Smith (R-Texas) last week…
New Thematic Collection on “Disrupted Identities: Colonialism, Personhood, and Frontier Forts”
Post prepared by Mark Axel Tveskov, Southern Oregon University Laboratory of Anthropology The forthcoming issue…
The Dredge Florida: Impacts of Larger Storms on Submerged Resources
Written by: Allyson Ropp Cultural heritage is found on land and under the sea. Like those…