Western Bohemia has a rich archaeological heritage and a scholarship reaching back well over a century, but virtually none of that archaeology has examined the post-medieval period.  In the wake of the Velvet Revolution, though, Pavel Vareka began a historical archaeology project at the University of West Bohemia that ambitiously reaches over most of the past millennium and pays particularly close attention to the last 500 years:  In the present-day Czech Republic this ranges across the 30 Years War (1618-1648) to the Revolutions of 1848 to two world wars and 41 years as a Communist territory in the Eastern Bloc.   Pavel is committed to partnering with global historical archaeology scholars, and an astounding number of well-preserved sites dot Western Bohemia.  Many sites along the border have continuous occupations since the 14th century into the 1960’s, and few places can make a more persuasive claim for being transnational and multicultural than the Czech Republic, with Celtic, Germanic, and Slavic peoples migrating into the region in prehistory and more recently Moravians and Poles among the flood of peoples settling in the region.  Many Czechs migrated to the US beginning in the 1850’s, with one Chicago community dubbed “Pilsen” in reference to Plzen, the home of the University of West Bohemia.  In 1900, only Prague and Vienna had more Czech residents than Chicago, and the US today claims about 1.6 million people of Czech descent. 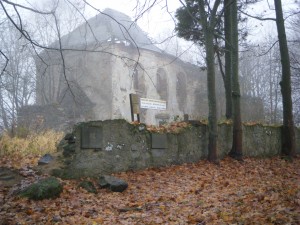 The ruins of this church near Plzen were used well into the 20th century.

The shadow of World War II and communism hang over the contemporary Czech Republic, but they provide an exceptionally powerful setting to weave consequential historical narratives driven by archaeological materiality.  Last week Pavel and his colleague Michal Rak took me and my University of Oulu colleague Timo Ylimaunu to see some of the numerous sites scattered between Plzen and the German border about 55 miles away.  Pavel and Michal are documenting the cyclical abandonment of villages in the region during the 17th-century, when numerous residents were driven from their homes by the invading Swedish Army and in many cases left villages standing with a rich range of domestic material culture in place.  Ironically, after World War II the communists consolidated many of the villages in the region and razed those close to the border, some of which had been continuously occupied a half-millennium.  The architectural and archaeological preservation on these sites is absolutely remarkable, and scores of such villages dot the region awaiting archaeologists.  Nevertheless, as in many places in the world, the archaeological resources themselves are endangered, poorly protected, or not valued by some scholars and communities.  While we were surveying a community cleared in the 1960’s, a metal detectorist was rooting through the ruins, casting aside nearly everything in search of World War II artifacts.  At a remarkable medieval church ruin with 20th century burials near Plzen, graves had been opened by looters seeking valuables. 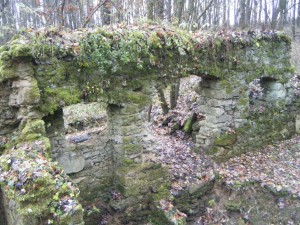 Part of a 14th century village, this house stood until the 1960’s, when the residents were forced to move because of its proximity to the German border. The University of West Bohemia recently excavated this home.

The opportunities for global scholars to partner with Czech colleagues are immense, and the groundwork laid by Pavel and his colleagues—and their commitment to work with international scholars—makes such work much more practical.  Learning the history of a whole new place can be truly exciting, and living in places like Plzen can be much less expensive than many American cities.  Liberated by Americans at the end of World War II, Plzen also is especially warm to American visitors today, and reminders of the Czechs’ appreciation for American troops are all over the present-day city.   Many historical archaeologists bring methodological training, material culture training, and a commitment to public engagement that can expand central European archaeology significantly.  The scholarship that can be explored in the Czech Republic and in global connections between Western Bohemia and North America are enormously important to expanding a truly global historical archaeology. 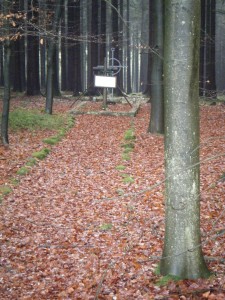 Western Bohemia had an exceptionally traumatic 20th century history. At the very close of World War II, prisoners from concentration camps were driven on desperate “death marches” that claimed one in four prisoners. During one of these marches, 37 people were killed and buried in this mass grave near the current Czech border; the grave was exhumed and the victims moved in 1946. Michal Rak and the University of West Bohemia directed recent excavations of the the site, recovering 22 shoes and a spoon in the former mass grave.

Next year the European Association of Archaeologists’s annual conference will be held in Plzen and hosted by the University of Western Bohemia, so for those who are curious to visit the region and see these exciting sites this will be a valuable chance to visit and to meet our post-medieval colleagues in central Europe and beyond.  The world is covered with enormously fascinating places to do archaeology, and West Bohemia’s rich prehistory, medieval landscapes, and sobering wartime and communist heritage rank among those places to which historical archaeologists should turn.