Boom baby! Though many archaeologists cringe at its origins, how many times will we hear that catch phrase on our digs this summer? It’s catchy and the show that spawned it, American Diggers, is a hit for SpikeTV. Everything about the show is anathema to professional archaeologists: the destructive excavation methods, lack of concern for context and, especially, the sale of artifacts. But what can you expect from the network that brought you 1000 Ways to Die? So how do we explain National Geographic’s very similar show, Diggers?

National Geographic!?! Aren’t they on our side? They are an organization that has published the most recognizable popular scientific magazine in the world. They have covered and supported thousands of archaeological digs and have several archaeologists on their staff. What happened?

The response from the archaeological community has been immediate and passionate.  People Against National Geographic Channel’s Diggers and Spike’s American Diggers Facebook pages have surfaced with thousands “liking” the message to Stop the Looting.  Professional archaeologists have taken to the media as well with the SAA speaking against the shows to NPR and other professionals speaking out in the St. Augustine Record.  Have they listened? Maybe.

I recently attended a workshop convened by the National Geographic Society to discuss their new show. It seems they were genuinely surprised at the professional outcry over its airing. And, unlike SpikeTV, they were embarrassed and wanted to discuss what might be done. In attendance were professional archaeologists, avocational metal detectorists (AMD), and network and program executives. The discussion that followed was lively, though civil, and is summarized here.

The producers led off the meeting by declaring that the traditional documentary was dead. Only PBS could afford to broadcast an hour-long archaeology program. Commercial television requires more popular subject matter. So, how do you make a show that is both popular AND ethical? There were many suggestions made to make the show more palatable to the archaeologists. The main points were that a concern be shown for location and context, and that the artifacts not be monetarily valued or sold. It was suggested that the show’s AMDs work with real archaeologists, helping them out while abiding by their rules. It has worked elsewhere.  We’ll see what happens.

I think the biggest takeaway that I had from the meeting was how badly we as archaeologists have failed in getting our message out to the general public. Or at least in persuading them as to what our discipline is really all about. It’s more than just finding stuff. It’s the story the stuff has to tell. Our underwater colleagues have seen the public sympathies go out to the treasure salvors. Now it’s the terrestrial archaeologist’s turn to watch the viewing public tune-in to shows that portray archaeology as a lucrative scavenger hunt.

So, what do we do? Write off a large chunk of the population as beyond our reach? Buy an artifact price catalog and sell out to the next network that calls?  Surely there is some middle ground that gets our point across without boring the public to tears? It’s become apparent that these shows are not going away. Paul Mullins and I have both been contacted by producers pitching ideas similar to American Diggers. The calls are worrisome, but I worry more that they will quit calling and produce their shows with no input from us.

Read theTranscript from the meeting with the National Geographic Society. 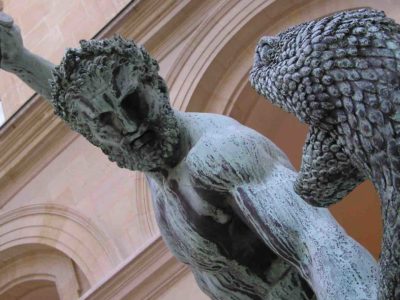 Interpretive Sins
by Tristan Harrenstein Interpretation is scary to many people, and I understand why. We put…
Ethics: Who Decides?
Ethic – n. rules of behavior based on ideas about what is morally good and…