An important aspect of this program was all 12 participants were metal detector dealers. As dealers, all participants are respected leaders from across the country who are linked into a network of metal detectorists. Bringing them to a better understanding of the shared goals and values between archaeologists and metal detectorists secures a foothold into the much larger hobby community. What discussions with these dealers revealed was that interest in metal detecting is growing, not shrinking. They all agreed that designing programs that give detectorists an entry into archaeology was essential for a more productive interaction between the two groups. As such, we designed this week-long program as a pilot project to see how this interaction could take place. Instrumental in organizing this group of dealers was Minelab Americas, a leading developer of metal detector technology. Minelab has been involved in several organized efforts to join archaeologists with the metal detector community for public outreach and education. 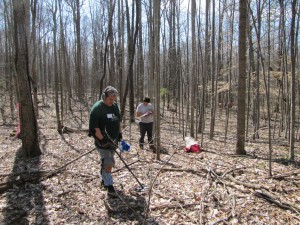 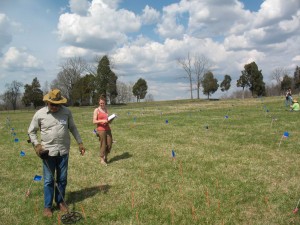 In the course of the week’s program, the detectorists were exposed to two very different use of metal detectors—the first for site discovery and the second for defining a site. Site discovery took place in wooded portions of the property that had never been systematically surveyed. By gridding the woods into 20 meter squares, each area was carefully scanned with detectors and artifacts sampled. Metal targets were excavated based on protocols such as depth, density, and signal strength. In this survey, archaeologists depended on detectorists’ expertise on reading signals while detectorists communicated the characteristics of the hits to allow archaeologists to determine how to sample. This process allowed some 20 acres to be surveyed in two days, and three sites (two early 19th century slave quarters and one barn/work area) were discovered. In addition, archaeologists and detectorists were able to determine which areas were potentially plowed in the early 19th century based on horse shoes and plow parts.
In the second portion of the program, a known site in an open field was gridded off into 10 foot squares and all signals in each square were marked with skewer sticks. Densities across the site were plotted in this manner and then selective squares were sampled to determine the historic context for the concentrations. In the process, three clusters of hits were deciphered across a  300 ft x 300 ft area that suggested the presence of several house areas within this early 19th century slave settlement. In this exercise, as in the woods, metal detectorists were quick to understand the value of the machine as both a non-invasive remote sensing device and as a tool to quickly locate and define hits that could be sampled without disturbing deep stratigraphy. 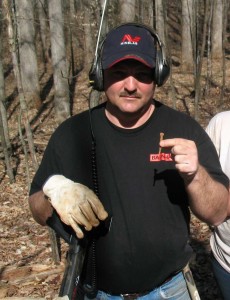 Throughout the week, both detectorists and archaeologists attended lectures geared towards demystifying the rationale behind field techniques employed during the week’s surveys. Topics such as recovery of information from features was combined with how signal depth could be used to avoid damage to features during survey and how recovery of a wide array of artifacts (including the ubiquitous nail) could aid in the interpretation of sites. Throughout the lectures, emphasis was placed on how metal detecting can actually enhance archaeologists’ ability to preserve site integrity. Participants walked away with not only a better understanding of how particular archaeological methods can benefit from metal detector surveys of a site, but also how care in recovery during metal detecting could enhance the enjoyment of the hobby. Both groups exchanged information on sets of artifacts that were important to each others’ discipline—archaeologists learned more about specific functions of diagnostic metal items in our collection, and metal detectorists came away with a better understanding of the variety and range of nails found at sites. Throughout the process, open dialogue was the main means of sharing information between the two groups—something that does not often happen between archaeologists and metal detectorists. This dialogue allowed us to share with participants how our methods led to data preservation both during survey and excavation of sites.

In the end, the goal of the program was to foster a mutual respect between the staff archaeologists and the metal detector participants. This goal was met through camaraderie built from shared discoveries, learning, and hard work. Metal detectorists left the program with the prospect of seeing how their hobby could be extended into the realm of archaeology, and archaeologists left with an understanding of how the knowledge base and skills held within the metal detecting community could be used for site survey. Telling were the exchanges of gifts between the groups—archaeologists providing metal detectorists with trowels, and metal detectorists bestowing pin pointers (electronic devices used to pinpoint the location of metallic objects in a small hole). The exchange of information, techniques, technology, and skills allowed for open discussion of views that each held of the other and a better sense of common ground between the two groups.

Proof for the success of this outreach program came both during and in the days following the program. Discussion forums featured detectorists writing in about the program, twitter pages were active with questions regarding the program, and several blogs featured the highlights of the expedition. In the days following the program, several dealers featured the highlights of their interaction on their company webpages, with one even donating a percentage of his monthly profits to furthering the preservation of archaeological sites at Montpelier, a donation that will be matched by Minelab Americas. Metal detector participants were encouraged to use the program as an entry point for contacting local archaeologists in their region to offer their services for identification and definition of sites. By learning a common language that archaeologists would understand (gridded systematic survey, sampling, mapping) we hope that these participants will be better able to make contact with archaeologists to offer their services. We hope that this exchange can continue and foster more discussions concerning our common goals to preserve sites and discover information about the past.

Have you, as an archaeologist, used metal detector technology in your survey work? Have you worked with metal detector enthusiasts in conducting these surveys? If so, what types of engagement have you used? What were some of the challenges you faced in establishing such programs, or what hurdles are keeping you from establishing one now?

Interested in developing your own training course? Dr. Reeves has made the Information Packet from his project available online. You can also see the video below that discusses Montpelier’s longtime relationship with metal detector technician, Lance Crosby.

Tagged with: archaeology, Archaeology in the Community, engagement, historical archaeology, Looting, metal detector, Montpelier, survey
Related Posts
New Thematic Issue of Historical Archaeology: Current Research into the Archaeology of American Landscapes
Landscapes surround and interact with us; they constrain and inspire our actions. Delving into the…
What’s the Most Interesting Thing You Found? Thinking about How Archaeologists Communicate with the Public
by M. Jay StottmanIt is the oldest and most basic form of public archaeology, but…
The Future of the Past: Using 3D Replicas for Public Archaeology
For over a year now I have been working in the Virtual Curation Laboratory at…