I happen to be a public archaeologist in a place many might envy (especially after this winter):  southwest Florida.  I have worked at the Florida Public Archaeology Network for several years and have done public archaeology and public history in a number of states across the U.S. East Coast. I was excited to take this job and apply what I’ve learned to a part of the world wholly new to me.

One of the biggest parts of public interpretation is knowing your audience and I quickly learned that that was going to be more difficult than anticipated.  Southwest Florida’s population history is inconsistent at best.  Without any real roads or rail lines, the area remained as wild as any of the west until the 1920s and 1930s. Today there are very few “native” communities.  In one of the counties in my region, the local historical advisory council reported that fifty percent of the population moves out of the county every eight years (Charlotte County Historical Advisory Council 2012).  The rest of the area residents are migrant families and snowbirds. “Snowbirds” (for those not in the know) are retirees who come south for The Season (the period between Thanksgiving and Easter) before returning to the Northeast U.S., Midwest U.S., or eastern Canada.

The question became: how do you connect people to a landscape and an archaeological past with which they had no personal connection?  A connection to one’s own community, backyard, and family history is the first and easiest way to bring together archaeology and the wider public (like these wonderful public archaeology projects: The Maritime Archaeology Trust, Ontario’s Fugitive Slave Chapel, and the WWII Maritime Heritage Trail, Battle of Saipan).

When the local population is not at all local (or permanent) and when archaeological interest stops at resources from “back home,” some public archaeology techniques just will not work. I needed a new game plan that avoided an assumption of prior common connection or knowledge.  I also needed to redefine what meaningful and successful public archaeology meant in this case.  If you ever find yourself in a similar situation, here are some things I’ve learned:

As a discipline we’ve moved far past the days of the Big Men worship. There are so many more fascinating personal and wider cultural connections found in a modern archaeologist’s research. We know so much more now that it’s almost a pity to get stuck on the George Washingtons. But to an unconnected seasonal visitor these singular individuals can act as a gateway to a much more complex discussion of archaeology. 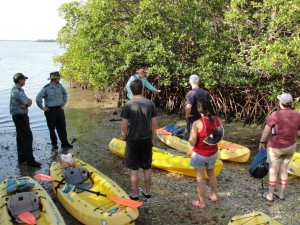 Including the Southwest Florida leg of León’s 1513 expedition helped me broach the topics of proto-historic and historic native populations (primarily the Calusa) and their cultural adaptations in the face of the Spanish, the Calusas’ ties to Cuba, Spanish ships and shipwrecks in Florida waters, and the archaeological evidence of Florida’s role as a northern borderland to their New World colonies through lectures and children’s programming.  I not only placed an emphasis on broader archaeological principles and the preservation thereof, but directed them to actual physical sites and museums where they could learn more.  We even offered kayak paddles to Mound Key Archaeological State Park which was the Calusa capital at the time of contact and the site visited by León. Participants could connect the Big Man to the very people and environment he visited 500 years ago in a very tangible way.

Additionally, unusual and personal topics find niche audiences. I’ve spoken about the Florida archaeology of pets, beauty and hygiene, tourism, gambling, and toys.  By far, my most popular and oft requested talk for the snowbirds is the archaeology of bootlegging and rumrunning in Southwest Florida. You might be surprised what goes over well.

Sometimes Digital and Social Media Sources are Not Always Your Friends

It is almost hard to keep up with all of the innovative ways archaeologists are using social media and digital resources to share their work with the public (for example, IUP’s Archaeology Island and VCU’s Virtual Curation Laboratory, to name a few).  Unfortunately, in an area with residents (and even historical organizations) that have absolutely no online presence, all the Facebook posts, Twitter announcements, Reddit threads, and digital collections will go unrecognized and unutilized.  I have had to balance my accustomed social media presence with other traditional methods like good old fashion newsprint, TV, and radio, printed and posted flyers, and a great deal of pavement pounding. In my case, old standbys have been vital.

There seems to be a great deal of focus on a very narrow range of historical and archaeological topics in southwest Florida: the Calusa, the Seminole, and snowbirds Thomas Edison and Henry Ford.  Since those were heavily represented topics, I sought out new pastures.

Fort Myers is named after a Seminole War and Civil War fort that once stood on the site.  Surprisingly, this era is of little focus in the town’s historic interpretation and preservation endeavors, leaving the door wide open for new efforts. I was genuinely surprised to learn how many people didn’t know Fort Myers was named after a fort, and an unusual fort at that. Interestingly, most of the Union troops stationed there during the Civil War were from the 2nd Regiment U.S. Colored Troops. 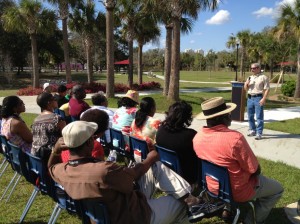 Together with the Lee County Black History Society, FPAN initiated a community celebration commemorating the USCT in the historically African American neighborhood of Dunbar.  Reenactors, community organizations, historians, archaeologists, and two American Legion posts participated in the inaugural event in which more than 150 visitors attended.  2015 marks the 150th anniversary of the Battle of Fort Myers and we plan to host an even bigger celebration to engage this underserved population. 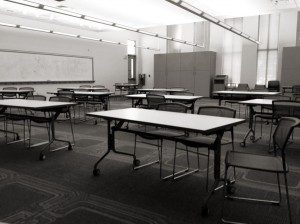 My only companion was the comforting sound of crickets.

This was (and is) the hardest lesson I’ve learned in such an attendance numbers-focused field.  Constant pressure has been the key to success.  My first year in Southwest Florida, well-advertised, community-requested events went completely unattended.  No one.  Not a seat filled.

Year two, my usual audience had two to 12 people.  I have never been more elated to see two people in my whole pubarch life. At last, progress!  My “success meter” has mentally shifted from attendance counts to number of programming invitations.  I began to receive more speaking programming invitations to unusual locations like yacht clubs, Sugar Festivals, Swamp Heritage days, and DAR meetings.  In these early stages, unsolicited invitations are markers of an accepted message and spread of legitimacy.

Year three has brought audiences of 12 to 150+ people.  Seasonally rotating populations mean timing and scheduling are key.  Adapting my pace to “Florida time” and re-imagining what successful public archaeology looks like in southwest Florida has given me a whole new outlook and direction for my future work. Hopefully they day will soon come when the snowbirds and other temporary and connectionless residents of southwest Florida will feel a little more connected to their home-away- from-home thanks in part to FPAN’s work.

So tell me, how do you engage connectionless populations? How have you been able to successfully connect with tourists?