As I wrote about this time last year, North Carolina’s coastal archaeological sites are in a constant state of change. We are currently working to identify, document, and mitigate the effects of climatic change on these sites through different means. The complexity of North Carolina’s coastline and associated environmental changes make implementing standard mitigation and adaptation efforts challenging. This is not unique to North Carolina, but the struggle is evident in different sites across the state. Not only are our coastal sites facing erosion from storm surges, sea level rise, nuisance flooding, and increased stormy events, but they are facing areas of pooling water, saltwater intrusion, and the subsidence of the land. Throughout the coastal area, a considerable number of shipwrecks are also being impacted by these changing conditions, including sea level rise, storm frequency and intensity, and acidification. Each incident requires its own method to address the impacts on archaeological sites. Below are case studies outlining different approaches used to manage archaeological site changes to ensure their preservation. 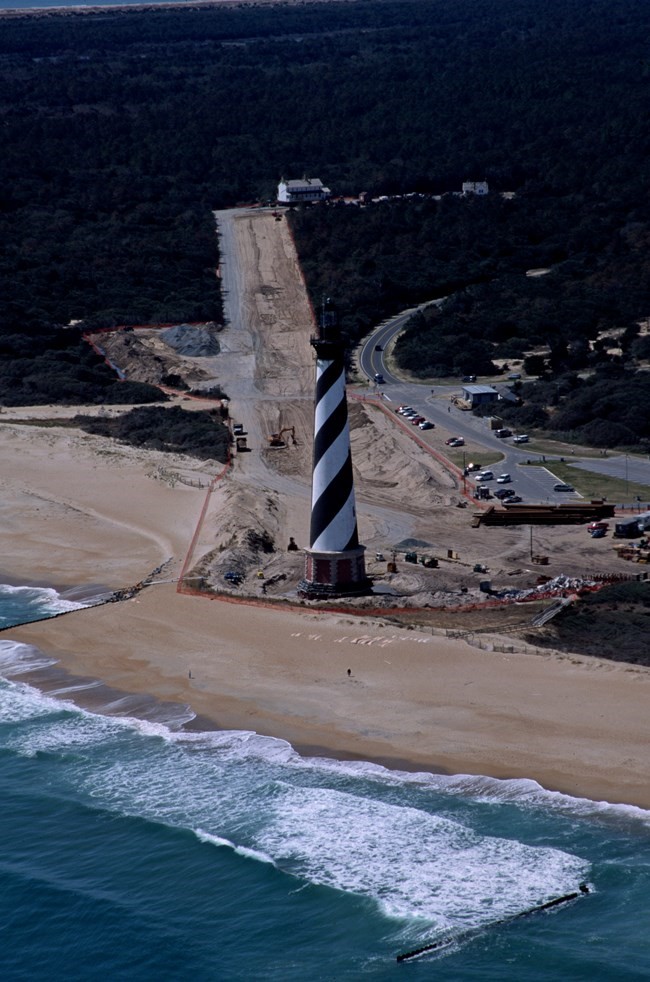 An aerial photograph of the Cape Hatteras Lighthouse on the shoreline in 1999 with its path for movement laid out behind it (Photo Credit: National Park Service 1999).

Now a local and cultural landmark of the Outer Banks and managed by the National Park Service, the Cape Hatteras Lighthouse sits on the widest part of Hatteras Island. Hatteras Island is a barrier island. It is impacted daily by natural sediment transportation processes along the shoreline. As the sea level has risen, these daily processes and infrequent storm overwash have slowly moved barrier islands closer to the mainland and, consequently, closer to the original location of the lighthouse. The same processes are occurring today, as oceanfront vacation homes are falling into the ocean and major road closures occur almost monthly.

Several concerted efforts were made to protect the lighthouse from the encroaching seas and mitigate damage to the important and iconic structure. In the 1930s, the Coast Guard installed groins along the shoreline to support sedimentation. These groins are still visible today. However, while the groins may have supported sedimentation in some shoreline areas, they also supported erosion in other areas. This continued erosion caused the Coast Guard to move the light and abandon the tower. When the National Park Service took over management of the structure, they continued erosion control efforts, including groin building and beach renourishment. However, these were only temporary measures. In 1999, after years of public input and environmental impact studies, the National Park Service, with Congressional support, decided to move the lighthouse and its foundation inland one mile. Over twenty years after the first move, coastal erosion is still threatening the lighthouse, and moving the tower again may be back on the table. 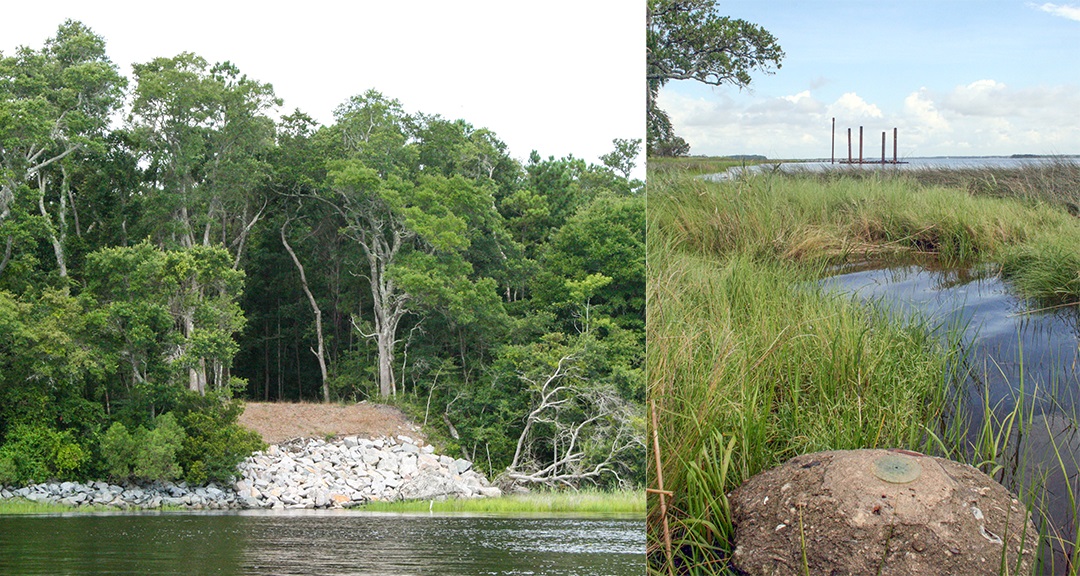 Erosion at Brunswick Town/Fort Anderson State Historic Site. The left image shows the collapse of part of the Northern Battery and the installed rip rap to control continued erosion. The right image shows the water deterioration of the marsh and the southern end of the reefmaker system in the background (Photo credit: NC Office of State Archaeology 2021).

Brunswick Town/Fort Anderson State Historic Site is an archaeological site along the lower Cape Fear River. The historical site marks the first permanent settlement in the region, a major colonial and early-statehood port, and a Civil War Confederate fort. Following the end of the Civil War, the area fell out of use until it became an area of interest to archaeological researchers seeking to identify the location of the first permanent Lower Cape Fear River settlement. Since then, the site has become a part of the state’s Historic Sites and an area of continued archaeological exploration. The location, however, also exposes it to extensive threats from climatic change. The site faces erosion of major landforms and marsh coverage caused by daily sediment transport, storm surge, saltwater intrusion, water pooling, and land subsidence.

While most of the site is elevated above, major historically significant portions of the site are located on the shoreline, including two known colonial wharves and a battery wall. Initially, efforts focused on documenting the exposed archaeological components and collecting any artifacts that were evident on the surface. This allowed the site staff to understand the changes occurring. However, sustained extensive erosion around the colonial wharves and the partial collapse of the end of the northern battery led to the need for more comprehensive efforts. The team first installed rip rap and marine mattresses along the erosion areas to hold down the sediment. These temporary measures still allowed for continued erosion in these areas. Since 2017, the site staff have taken more extensive steps to support sediment accretion. They have installed reef-makers along the shoreline to attenuate the waves and support sediment deposition. Research and observational evidence have shown that this system is causing sediment deposition. This sedimentation has allowed for the stabilization of the archaeological site. However, it has facilitated the site’s coverage, making it impossible to recover information from the now-buried sections.

Shell middens are a unique type of coastal archaeological site. In coastal North Carolina alone, there are approximately 600 shell middens that have been documented or are accounted for in the North Carolina site file. Shell middens (also known as shell heaps or shell mounds) are discard piles left by prehistoric communities. These middens consist primarily of used and discarded shells but typically contain other cultural materials, including ceramic, bone, and stone tools. The calcium carbonate in the shells helps create a more alkaline environment that allows for the preservation of the organic material housed inside the middens. However, their presence in coastal areas makes these middens vulnerable to environmental conditions. Sea level rise, shoreline erosion, wave energy, and storm surges have and will continue to alter these significant resources in coastal areas.

In the late 2000s-early 2010s, Lawrence Abbot, the Assistant State Archaeologist for the North Carolina Office of State Archaeology, undertook a study to identify the archaeological resources in the Coastal Plain that were susceptible to sea level rise. The study determined that of the 5753 archaeological sites within 30 feet of sea level, 581 had shell middens. Forty-two sites were also deemed eligible for the National Register of Historic Places. This desk-based study provided a basic inventory to begin future assessments of coastal areas. To effectively adapt to and mitigate the effects of climate change, it is first vital to know where known resources are and the threats they face. For example, this desk-based assessment only identified sites within 30 feet of sea level. It did not account for the hundreds of other archaeological sites in the Coastal Plain that may be impacted by other climatic conditions. But it provided a starting point for future analysis.

These case studies show a vast array of methods and measures that have been used to protect archaeological resources from the impacts of climate change. While some are more substantial solutions, the information and efforts at all these sites over the ability to learn new information before sites change states.

Related Posts
From the Society for Historical Archaeology’s Governmental Affairs Counsel
SHA Members’ Congressional Visits Thanks to those of you who participated in Cultural Heritage Partners’…
Wikifying Historical Archaeology
In February historian William Cronon admitted his deeply rooted skepticism about Wikipedia as a scholarly…
SHA Storms the Hill!
The government affairs update in May included a long list of issues being pursued and…