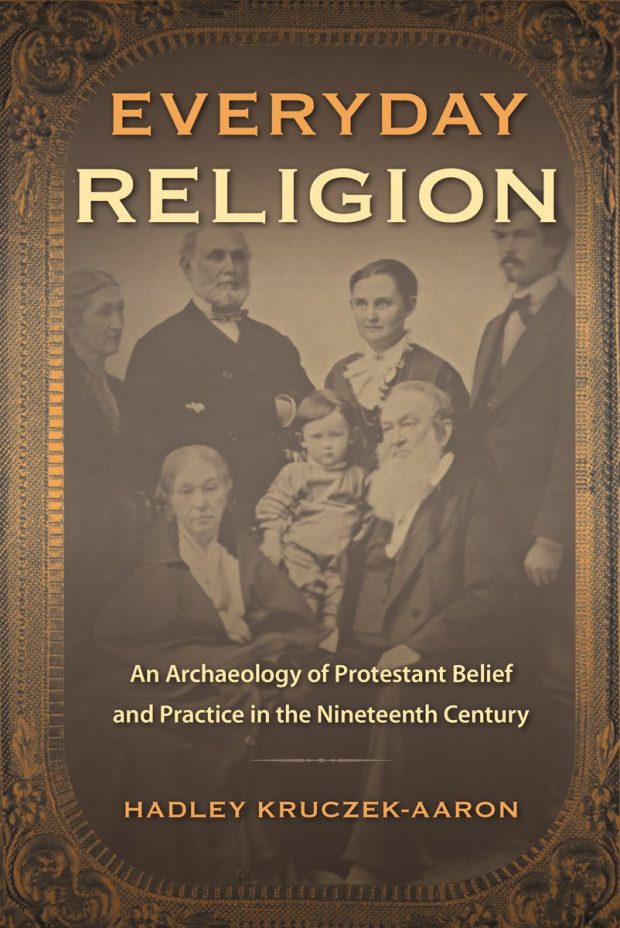 In March 2018, the SHA began a blog for the Society webpage to highlight our collaboration with various presses, including volumes published in collaboration with the University of Nebraska Press, Omaha.  The co-publication program expands our membership’s publication opportunities.  University of Florida Press is offering SHA members this publication for $35.00 (normally $79.95), an offer valid through January of 2022.  Be sure to use discount code EVREL when ordering!

If you are interested in contributing to a joint UPF-SHA published volume, please contact SHA’s Co-Publications Editor, Benjamin Ford (ben.ford@iup.edu)

Everyday Religion: An Archaeology of Protestant Belief and Practice in the Nineteenth Century (2015)
Hadley Kruczek-Aaron
Number of pages: 256; figures

This book questions how religion was lived in nineteenth-century America through a study that weaves together a range of sources, both archaeological and textual. The focus is evangelical Protestantism, which witnessed a renewed popularity in the Second Great Awakening that brought hundreds of thousands to revivals in communities across America and contributed to the blossoming of numerous reform movements. Once converted, evangelicals aspired to live a life of Christian perfection, which included ideas about what believes should consume and surround themselves with inside the home. While written records are rich with descriptions of these new ideas, scholars know less about the ways believers actually lived them. The case study described in this volume contributes to the research domain by exploring how religion was lived at various sites excavated in Smithfield, New York, which earned a reputation as a reform utopia under the leadership of activist Gerrit Smith. An analysis of texts, artifacts, and landscapes suggests that living one’s faith and encouraging others to do the same in antebellum America was a process defined by struggle as believers and nonbelievers negotiated their beliefs and webs of social relationships at the household and community levels. This dialectical study raises questions about why the struggles have been forgotten by many in the present. Further, it contributes to a prolonged conversation that historical archaeologists have been having about how they do their work – including how they approach the written and material record as well as how they conceptualize religion, reform, consumption, and cultural identify.

MM: What are some of your motivations for writing/spearheading this book?

HKA:  I wanted to offer religion, and particularly religion inside the home, as an entry point for exploring the lived experience of 19th-century Americans. Until recently, other dimensions of cultural identity have taken center stage in archaeology, and when religion has attracted attention, objects and spaces typically identified as sacred (such as places of worship, cemeteries, and objects bearing religious iconography) have tended to be the stars of the show. In contrast, Everyday Religion places the spotlight on the home and demonstrates how objects that are ubiquitous on historic-period domestic sites—ceramic tableware and teaware, glass bottles, smoking pipes, and food remains—can reveal details about the spiritual lives of past peoples and specifically the influence that evangelical Protestantism had on the material worlds of 19th-century Christians.

MM:  Who would you like to read this book? Who is your audience?

HKA:  My goal is to reach audiences both inside and outside of our discipline. Though the work is especially relevant to historical archaeologists in light of its nineteenth-century focus and because it amounts to an exploration of how best to approach material culture and texts, I hope Everyday Religion appeals to archaeologists, historians, material culture studies scholars, cultural anthropologists, and others with broad interests in religion, consumption, power, households, and cultural identity. And because I critically examine the public memory relating to antebellum religion and reform, Everyday Religion also would be of interest to museum curators, historic preservationists, and others focused on researching and presenting the history of these social movements to the public. This includes the growing number of researchers interested in the Underground Railroad, since the case study at the core of Everyday Religion is the central New York home of religious reformer Gerrit Smith, which was a well-known refuge for African American freedom seekers.

MM:  Now that you have published this book, what kinds of things are you dreaming up next? What is in the works?

HKA:  Since writing Everyday Religion, I have immersed myself in the history of New York’s Adirondack mountains, a region that has received scant attention from archaeologists despite the richness of its heritage. My goal is to use the archaeology of the Adirondacks to explore America’s evolving relationship with wilderness through the stories of a range of Adirondackers, who have struggled to live and to thrive in an environment that can be both breathtakingly beautiful and cruelly unforgiving. My recent fieldwork has explored sites that are associated with abolitionists, farmers, loggers, hunters, and tourists, and that date to before and after 1894, when New York State declared that the millions of acres of Adirondack Park land must be kept “forever wild.”