As a member of the Society of Historical Archaeology’s newly-formed Heritage at Risk Committee, I am interested in creating a dialogue – or at least being a part of the dialogue – on how climate change affects archaeological sites around the country, and what we as archaeologists can do to protect these sites.

Climate change has impacted cultural resources either directly or indirectly for some time, but this issue has gained traction only recently. It has become painfully clear that many sites, particularly those in coastal areas, are in danger of disappearing forever. In fact, I have seen the end result of years and years of climate change wreaking havoc on our heritage. Several years ago, I worked as an archaeological monitor for the National Park Service during the BP Oil Spill cleanup. The cleanup effort took place on the Mississippi Barrier Islands (Cat Island, East and West Ship Island, Horn Island, and Petit Bois Island). In the early part of the twentieth century, there was another small island, called Dog Island. Dog Island (later renamed the Isle of Caprice) was not a true barrier island, but rather a developing shoal created from the merging of several small ephemeral sand keys known locally as the “Dog Keys.” The island became the site of a bustling resort and casino between 1926 and 1930. However, the resort’s success was cut short in 1931, when the sediment required to nourish the island began to diminish. Without this nourishment, the island slowly began to erode in response to the normal effects of winds, waves, and tides. By 1931, the island was reduced to a sand bar devoid of dunes and vegetation, and a year later it was completely submerged. Although it is difficult to attribute the disappearance of the island to climate change, as it succumbed to natural processes, I firmly believe it had a hand in it. The rapidity of the site’s demise got me thinking: How many other sites have been lost, swallowed up by the Gulf? 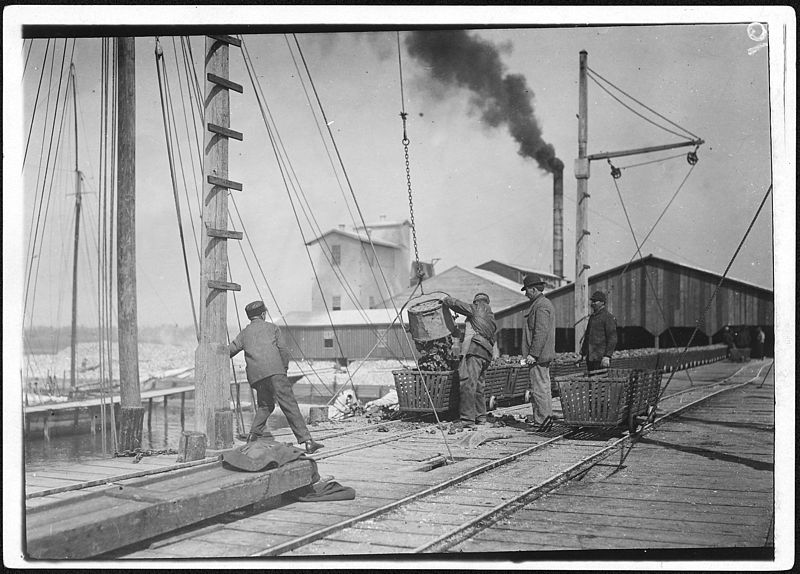 Since I am a coastal Mississippi native, my primary focus is on archaeological sites located along the Gulf Coast. Initially, I wanted to discuss in general the affect climate change has had on these sites; however, as it happens, I recently worked on a survey project that involved this very issue. The survey, which entailed both a terrestrial and marine component, was for a proposed shoreline protection and marsh restoration project by the Nature Conservancy in the small, coastal town of Bayou La Batre, Alabama. As with any project, I began conducting background research to locate any cultural resources that existed in the area. This research led to the identification of a historic site that had not been recorded previously. This site consists of building remnants scattered along approximately 150 meters of shoreline. Some of the remnants were located in the water, undoubtedly the result of decades-long erosion and severe storms. The site turned out to be the old Alabama Canning Company, which was an oyster cannery in operation during the early-twentieth century. 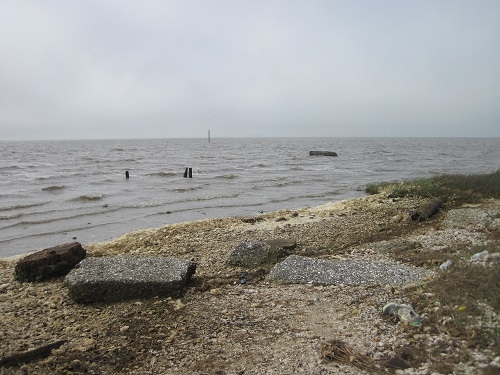 Concrete blocks observed on the surface at the cannery site. Note the inclusion of shell in the concrete. Photo by Philip Jungeblut.

The historic site clearly had suffered from the effects of climate change. Storms have torn the structures apart, and much of it is partially submerged by the waters of Portersville Bay. It is likely the site will disappear completely in the near future. As I was writing the report of the survey results, I pondered how to preserve this part of history. Typically, I would recommend avoidance, so it would not be disturbed any more than it already has been. However, avoidance does not really solve the problem of disappearing heritage on coastal sites. Of course, a data recovery phase of excavation would be ideal, but limited funding renders this option unfeasible. As it turns out, the proposed shoreline protection and marsh restoration project may ultimately preserve the site. Dredge spoil deposition will result in shoreline stabilization and probable sediment accretion over and across the site. Sediment accretion may work to halt further structural degradation and may in fact aid in in situ preservation. 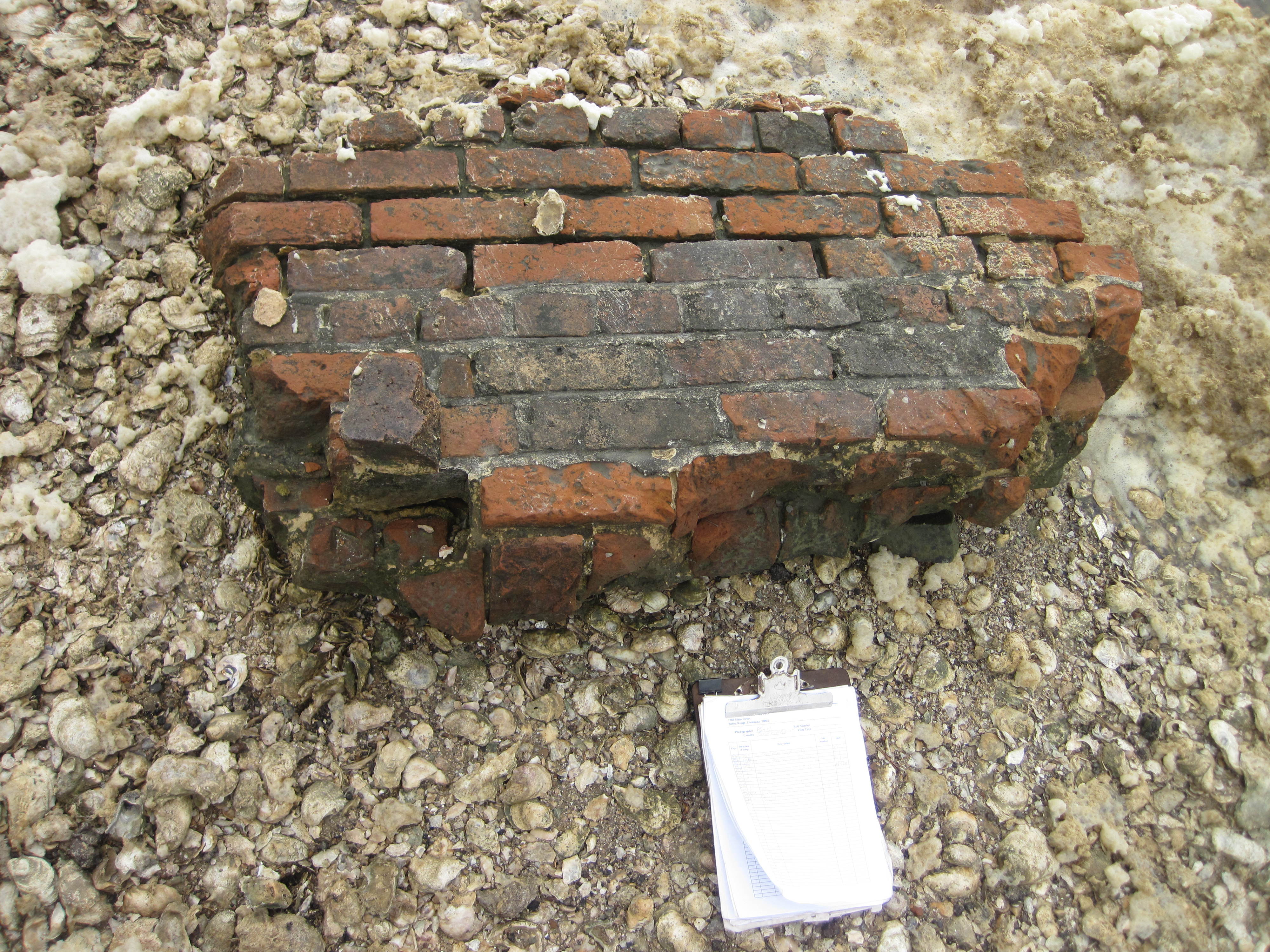 Part of a brick wall observed at the cannery site. Photo by Philip Jungeblut.

While the above action may help to preserve the cannery site, it may not work for others. Archaeological sites are unique, and the issue of preservation should be handled on a site-by-site basis. So, how do we protect cultural resources when every site is different? I believe communication is the key. Archaeologists, professional and amateurs alike, should talk to one another. Share our experiences, problems, and solutions. Additionally, we should engage the public. By getting communities involved, we are exposing more people to the topic of how climate change affects archaeological sites. Maybe with enough boots on the ground, we can find a way to save these sites and ensure the survival of our heritage.

Related Posts
Test
This is test
New Thematic Issue: Challenging Theories of Racism, Diaspora, and Agency in African America
Posted on behalf of William A. White, III and Chris Fennell, guest editors We are…
New Thematic Issue of Historical Archaeology: The Mardi Gras Shipwreck Project
During the summer of 2007, detailed mapping and archaeological excavations were conducted at the Mardi…