When I think back on the experience of building a maritime heritage trail, probably much like others who have worked on public or community projects, I get nostalgic about all of the friends and colleagues I met during the process. The old adage about it taking a village to raise a child also rings true for community projects such as heritage trails – it really does “take a village to build a trail.”

Community projects by their very nature are incredibly complicated, but can be infinitely rewarding. In a community as diverse as the Commonwealth of the Northern Mariana Islands (CNMI), any project leader must understand that there are multiple voices to be heard and incorporated. This can be learned the hard way or the hard way. What I mean by the hard way is that no amount of research can prepare one for the diversity in meaning and importance of heritage to a community; one member has a completely different understanding of a shared bit of heritage from the next member. And it is important to incorporate as many of those voices as possible. 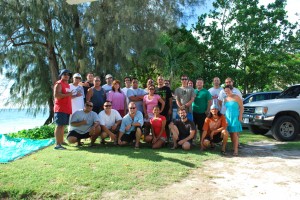 First training in underwater archaeology held in the CNMI.

This is the task that I set about doing six years ago when I stood in front of a crowd in a smoky little restaurant that consisted of both divers (there to see my presentation on heritage trails) and an angry group of fishers (there to see a second presentation about a national monument which was set to restrict their access to fishing and thus their livelihood). What I found that night was a community so passionate about their right/heritage of fishing and opposed to more official colonial platitudes and restrictions. What I learned that night was two things: first, that no matter how well-funded, presented or shiny an idea is, if a community isn’t behind it, it has no worth; and second, the CNMI community was one with a long history of struggling with outsiders and outside ideas, and if progress was to be made, the idea should be locally generated. To this day these two lessons have held true to form and earned friendships and collegial relationships that will last a lifetime, not to mention some great research projects.

The idea for developing a heritage trail was conceived by staff at the Historic Preservation Office (HPO) and shared with me when I first visited the island in 2007.  Though originally aiming to build a Spanish colonial research agenda, I was quickly taken by the incredibly diverse and intact heritage related to the WWII Battle of Saipan. With a little friendly persuasion from the HPO, I found myself in conversations about mapping, preserving and interpreting submerged WWII sites which included planes, tanks, shipwrecks and assault vehicles of both Japanese and US forces. The idea to apply for a National Park Service Battlefield Protection Grant launched a one year grant awarded to Ships of Exploration and Discovery Research, which eventually turned into a four year project (and has now moved inland). After holding several public meetings and discussing the trail with various stakeholders (dive shops, boat operators, government agencies, humanities groups, visitor’s authority, etc.) the trail began to take shape. Sites were chosen based on stakeholder and public interest, the history and archaeology was researched with an inclusive approach (including Chamorro, Carolinian, US, Japanese, and Korean groups) and products were carefully researched so as to reach the widest audience possible (all ages and divers and non-divers alike). In addition, since a focus on sustainability was key, the project included both heritage awareness trainings for end users and a conservation survey and management plan (funded by a second Battlefield Grant) that collected baseline data for the HPO.

The interpretive products that make up the trail include nine waterproof dive guides and four double-sided posters in both English and Japanese; a 2D and 3D interpretive film for the National Parks on Guam and Saipan (produced in conjunction with Woods Hole Oceanographic Institution Advanced Imaging and Visualization Lab, National Park Service’s Submerged Resources Center, and Windward Media); and a website which includes information about the Battle and submerged heritage sites. 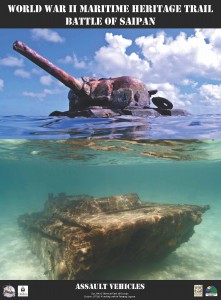 Poster from the WWII Battle of Saipan Maritime Heritage Trail.

But let me come back to the idea of it taking a village…the entire project from concept to completion would not have been possible if it were not for the interest of the local community. At every step of the way agencies and volunteers were not just included, but critical to the work. HPO conceived of the idea and several staff members assisted with recording the sites and conducting historical research; they also participated in training, first as trainees (Underwater Archaeology Training) and then trainers (Heritage Awareness Diving Seminar). Coastal Resources Management (CRM) provided in-kind support through the use of boats, fuel and the assistance of staff (i.e. captains, enforcement officers and biologists), as well as participating in and providing instruction during the training sessions. In fact, one CRM employee was so devoted to the project, he took vacation days so that he could participate in the field work! CRM also initiated a program to place moorings on the trail sites in order to minimize impact by visitors. Department of Environmental Quality (DEQ) provided in-kind support by offering boats, captains and expertise. CNMI Council for the Humanities promoted the project to the public by sponsoring public lectures and radio programs. NPS American Memorial Park hosted events such as public lectures, trainings and film viewings. Marianas Visitors Authority provided useful visitor and diving statistics in the planning process. In addition to the government agencies, private individuals hosted barbeques, provided in-kind support for hiring vessels, volunteered to conduct field work and historical research, provided translation services, gave local tours, set up interviews with family members, lent vehicles, and generally treated us as family. 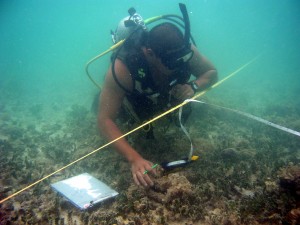 From 2007 to the present I’ve had the privilege (and I do mean privilege) of working with the community/village of Saipan to record and research their maritime history from their colonization of the island some 3500 years ago to the more recent and tragic conflict of WWII. But I suspect there will be many, many years to come because like a snowball rolling down hill, interest builds momentum and once a village gets excited, who knows what may come of it…

So what are your experiences with creating trails or working with a village (community)? In what ways was the success of your project the immediate result of community input and assistance? Do you think the rewards of working with a community outweigh the complexity of the process?

Related Posts
The Day of Archaeology 2012
On the 29th June, archaeologists from around the world will contribute to an innovative mass-blogging…
There is Power in Numbers: If Archaeologists Don’t Meet with Elected Officials, Someone Else Will!
Barbara Clark, Northwest Region Director, Florida Public Archaeology Network As an archaeologist, the idea of…
Enhancing our space with a sense of place
Over the last decade public archaeology in the UK has witnessed a growing profile. This…