Hundreds, if not thousands, of cemeteries can be found on numerous military bases across the county. Many date back to early towns and villages and hold the graves of early settlers and later, military personnel. The 13 historic cemeteries (2,100 markers) of US Army Garrison Fort Drum, New York are no different. (Fort Drum is located just east of Lake Ontario, and is the 107,000+ acre home of the US Army’s most deployed Division, the 10th Mountain Light Infantry.) Through the Directorate of Public Works (DPW), the Army works to maintain these cemeteries and to minimize military impact to these sites. Although on Fort Drum these responsibilities are carried out by the Cultural Resources Program (CRP) of DPW – Environmental Division, the process of stewardship can and does differ widely from one post to another.

Most recently, Fort Drum has acquired an intern (the author), through Oak Ridge Institute for Science and Education (ORISE), to inventory and “digitize” these historic cemeteries, while applying non-invasive geophysical investigative techniques. The premise for project was conceived by E.W. Duane Quates PhD, as a means for identifying sets of attributes associated with known African-American burials, which could also be applied to suspected unmarked burials, as a means of identification.

The primary goal of this endeavor was to create a geo-referenced database. Aside from a means of ethnic identification, this database would allow for more effective resource management, and grant the public ease of access to cemetery information. This information is currently available on The Fort Drum website as searchable SharePoint listings, and being developed into a fully interactive platform by Colorado State University’s Center for Environmental Management on Military Lands (CEMML).  A result of this dual-purposed database was also a large, easily manipulated, data pool which can be made available to outside researchers. The secondary goal of this endeavor was to use geophysics to investigate the possibility of unmarked burials inside of the cemeteries and outside of their boundaries. To illustrate the results of this project, results from Fort Drum’s Sheepfold Cemetery can be seen below.

Sheepfold cemetery (Figure 1) was part of the 200 acres owned by French aristocrat, James LeRay in the early 19th century. Originally this area is where he kept his sheep, his sheepfold. The cemetery contains 292 known burials (391 markers); the earliest known burial was in 1821, and the most recent burial was in 1996. As part of the (ORISE) project, the markers in Sheepfold cemetery were geo-referenced and recorded into a database. Ground penetrating radar (GPR) was also used to explore a large unmarked section of the cemetery which had been flanked by marked interments, including a known slave-turned-servant (Rachel) of the LeRay family. The results of this survey was compared against a control survey from a nearby area, which contained some of the oldest and most contemporary markers to those surrounding the open and unmarked survey area. As Figure 2 illustrates, the large, open, and unmarked area contains several anomalies which resemble the control of the smaller area in length, width, and depth, and are similarly oriented to the known interments of the cemetery (southwest to northeast). 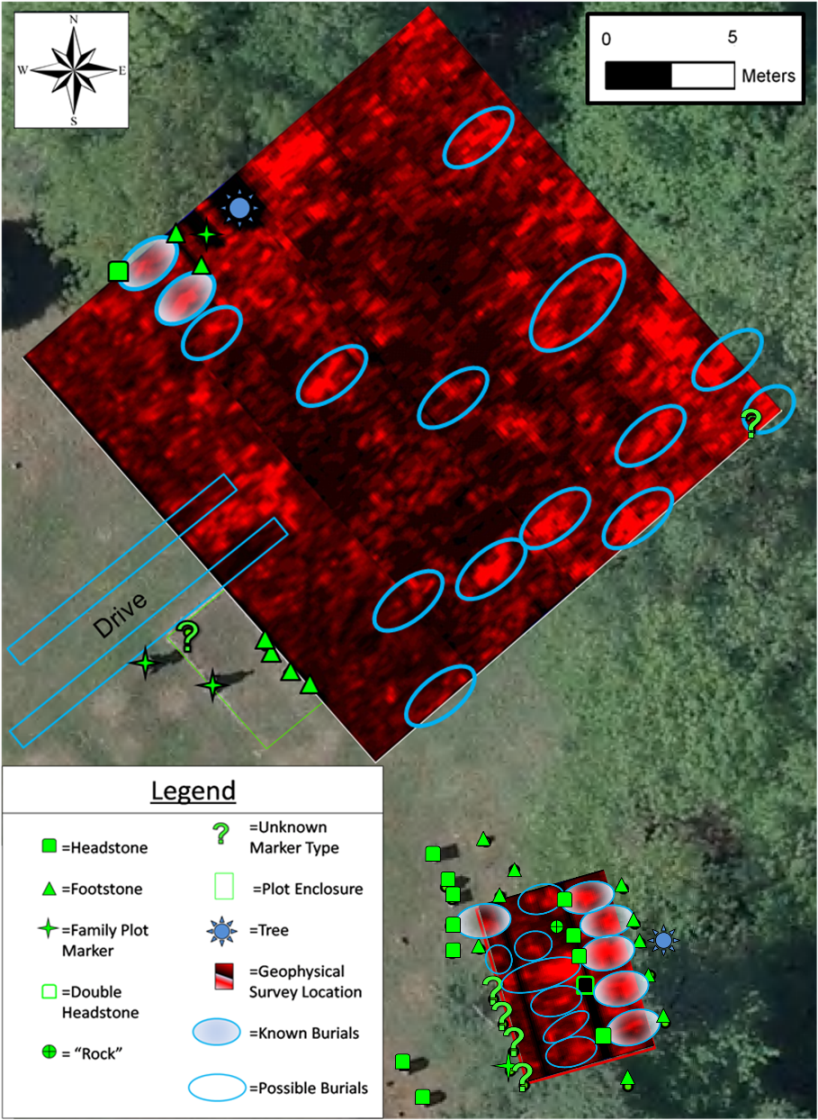 The database offers tremendous opportunities for analysis, but required preparation. To maximize database versatility, many different attributes were selected, defined, and assigned their own field. Relying partially on the University of Pennsylvania’s Historic Cemetery Plot and Marker Survey Form, over 90 different, quantifiable attributes (such as: birth year, death month, gender, age, last name, associated individuals, orientation of individual, marker type, marker height, other associated markers, grade slope, marker exposure, marker material, evident repairs, biogrowth condition, staining, cracking, foundation exposure, erosion level) were selected, with some attributes (i.e., name, death date) employed into both tables.  Surveyors used multi-directional lighting and shading to decipher the wording carved on the older, and more difficult to read, markers. At least two high-resolution photos (with optimum lighting) were taken of each marker to exhibit as many design features as possible (figures 3 and 4). Each marker was also geo-referenced using high resolution aerial photography, and aided by ground measurements. The data from the field was then added to the database in two separate (but linked) tables, one for public outreach and one for resource management. 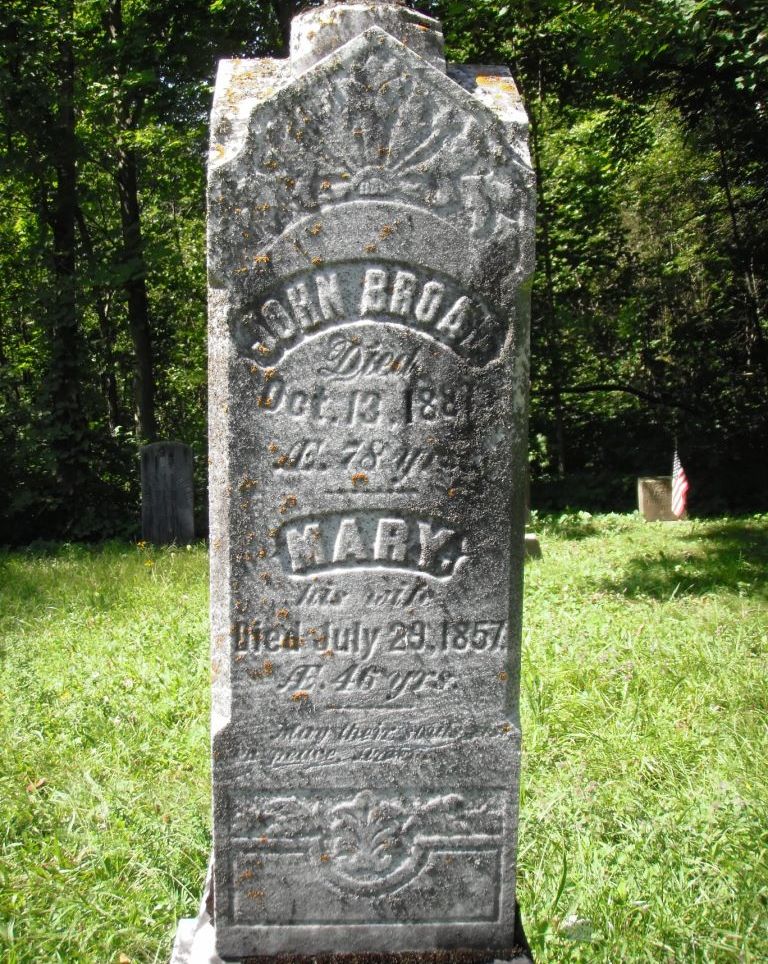 Figure 3: An example of the detail revealed by using optimum environmental lighting conditions to cast shadows into the previously invisible decorative motifs. 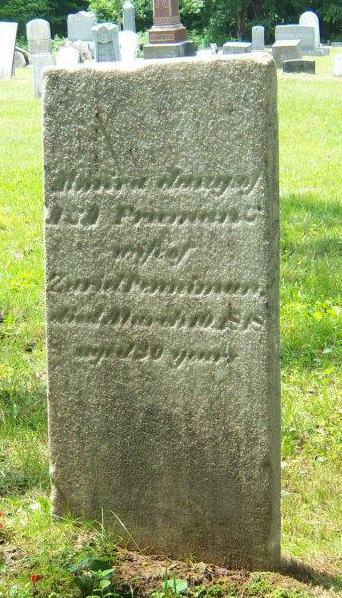 Once populated, the database allows for each attribute to be referenced and cross-referenced in a nearly infinite number of ways. Figure 5 offers an example of cross-referencing individuals’ information to examine demographics. Here, average age of death is cross referenced with decade of death and with gender, displaying the average life span of each gender for each decade, as seen in Sheepfold cemetery.  The database can also be used to analyze the markers themselves, via the resource management table.  For instance, cross examining the different marker materials on the basis of their total condition to see which materials weather the best.  In Sheepfold cemetery, ordered from best preservation to worst preservation is:  zinc, granite, ferrous, marble, concrete, and limestone. 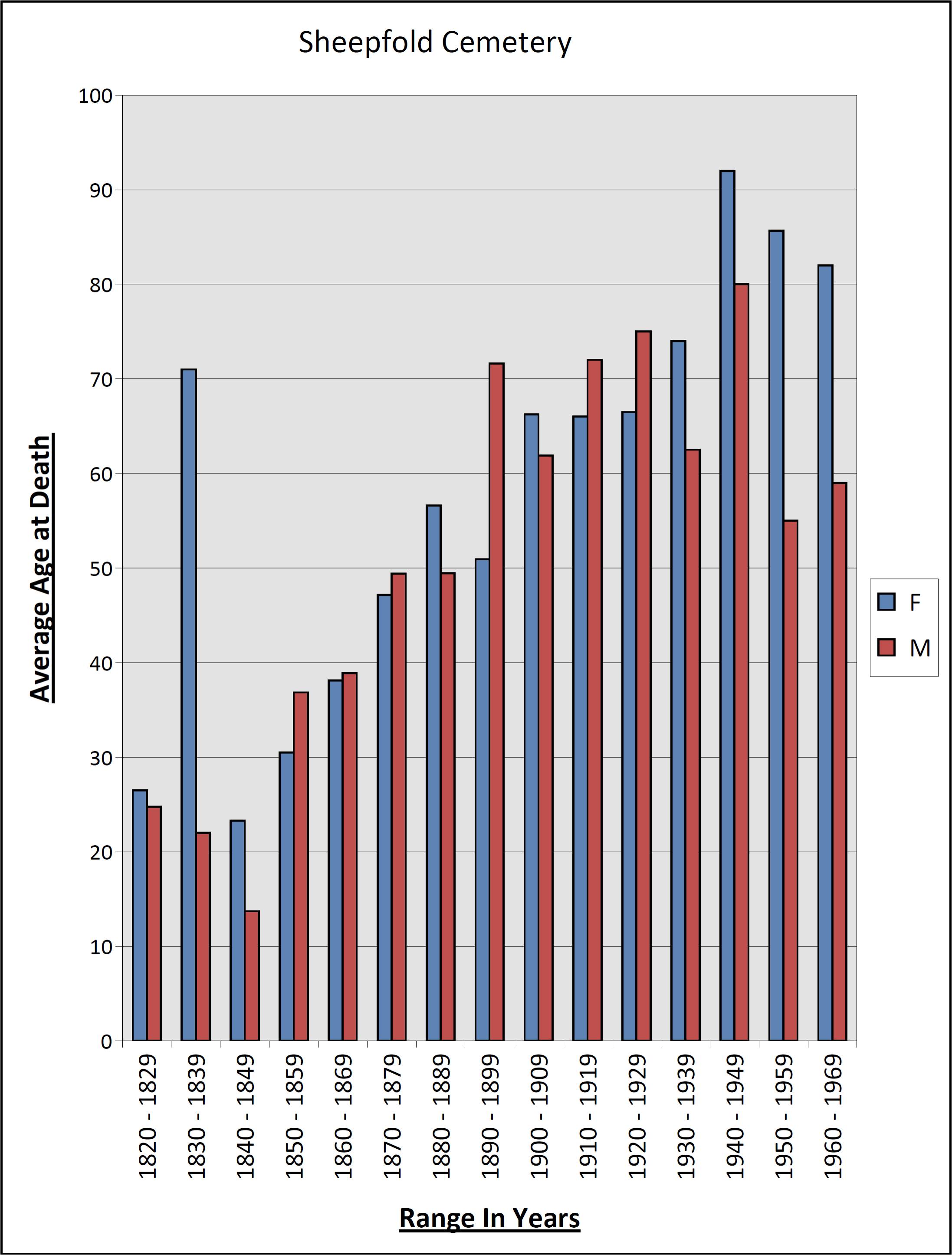 Figure 5: Sheepfold Cemetery average age of death by decade and gender. Note: does not include infants (presumed, unnamed), does include vets, each entry is represented by roughly three individuals.
(Image courtesy of the author)

When tied to the geophysical information systems, each marker or individually-related attribute in the database can also be examined in terms of its spatial meaning.  For instance, each marker can now be viewed in terms of when it was placed (earliest death year), and how the individual choosing the plot viewed the other markers and the surrounding landscape. Figure 6 illustrates the result of such an analysis, in Sheepfold cemetery. The burials started in the eastern portion of the cemetery and spread out closer to the road.  It also appears that after the interment of Rachel, a slave-turned- servant of the French aristocratic LeRay family (the northeastern most burial), the interments started to move away from her location more intensively and towards the southwest (until roughly a generation later). 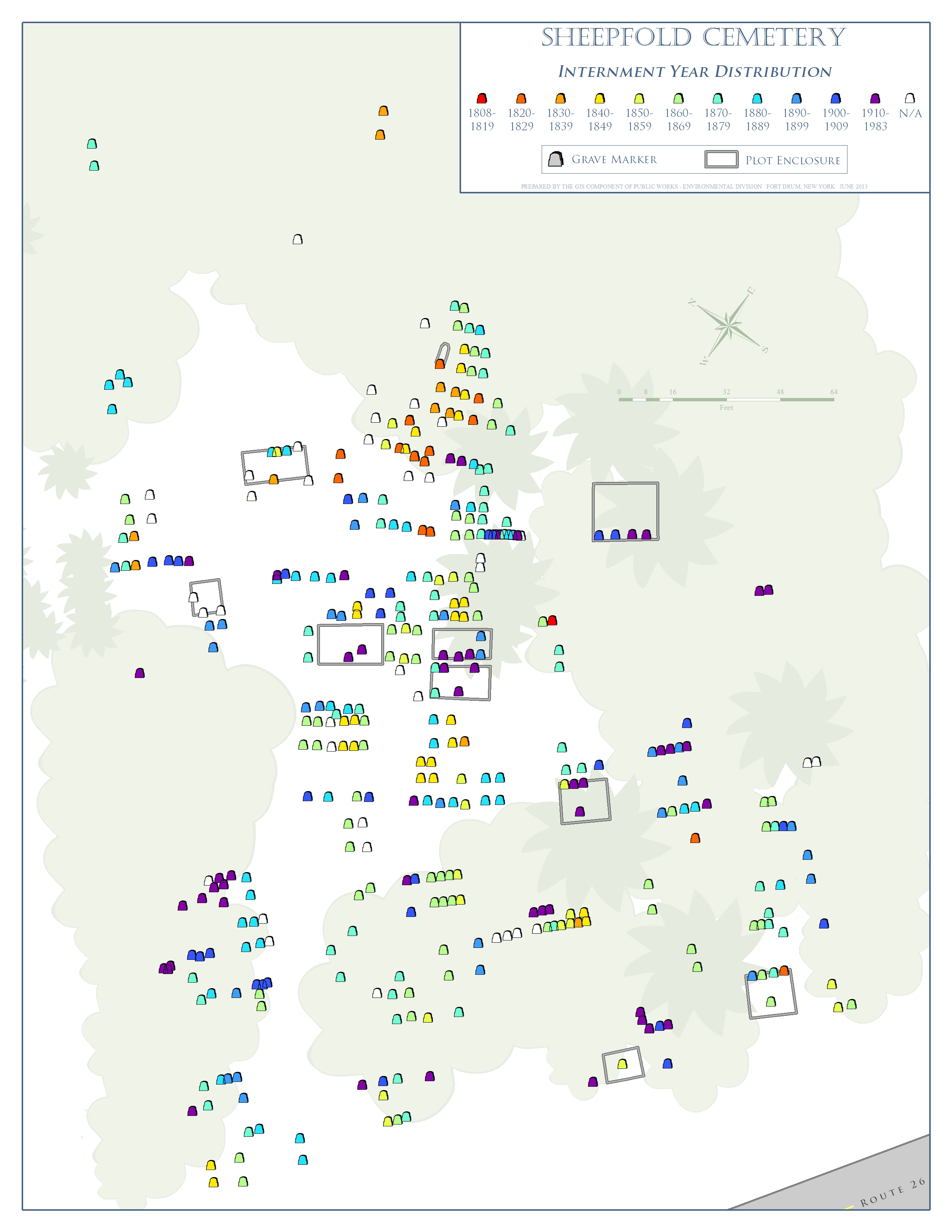 In conclusion, Fort Drum has utilized a variety of tools to enhance the management of and public interaction with the 13 historic cemeteries within its borders. The GPR survey offered insights into a previously speculative area, displaying similar anomaly attributes to the known burials. By properly identifying and defining marker attributes, an incredibly powerful tool has been developed for public information, resource management, and subsequent outside research. By geo-referencing the entries, the versatility of this database increases exponentially, allowing for spatial attribute comparisons and easy element location. It is important to remember that these principles may also be applied to other resources, allowing for more efficient management, public information, and data dissemination. Fort Drum’s Cultural Resource Management Program has made huge strides in its cemetery relations and management, continuing to innovate and share this sort of information through its public outreach program, which includes Facebook and Twitter accounts.

What are some applications and benefits of creating geo-referenced databases for other types of sites? (any specific examples?) At what point in the process does the dissemination of information (to the general public and possible researchers) come into play when designing and performing cultural resource management archaeology? (and why so?) What are the benefits and drawbacks of digitizing cultural resources as a means of compliance with the various historic preservation laws?

Read the other contributions for Tech Week, starting with “Understanding Cemeteries through Technical Applications: An example from Fort Drum, NY” by Duane Quates