Over the last decade public archaeology in the UK has witnessed a growing profile. This is in part due to a steady stream of documentaries on the television and opportunities for the public to get involved. Public membership based organizations such as the Council for British Archaeology (CBA), have played a valuable role in providing opportunities for communal engagement. Meanwhile regional commercial archaeological units and not for profit Trusts have been developing educational resources to engage with school children and community groups. These kinds of projects have sought funding through the UK’s national Heritage Lottery Fund, National Heritage Agencies or organisations like the CBA.

My role as Director of the Maritime Archaeology Trust (also known as the Hampshire and Wight Trust for Maritime Archaeology but forthwith referred to as the Trust) has been to precipitate a growth in public archaeology within the organisation and within the maritime archaeological sector. The Trust was inaugurated in 1991 with the objective of promoting archaeology in the region and Great Britain by research, training and education. It was set up by the civic authorities in Hampshire and the Isle of Wight at a time when there was a legislative void regarding holistic management of the submerged archaeological resource. Shipwrecks were being discovered and several were being excavated or even protected but collective management was yet to be considered. The Trust was formed to fill this vacuum in the region and it was set up with the belief that comparable organisations would be established across the country.

Throughout the 1990s core funding from the local authorities and central government enabled the listing of local wrecks, survey, excavation, the setting up of diver trails, the publication of booklets, and support for a local exhibition. Public involvement was strong but I realised there was a much larger audience that needed to have access to the world of underwater archaeology if broader public interest was to be sustained and with it, public support. This was becoming particularly pertinent as our core funding was being reduced each year.

The opportunity to increase awareness by developing a more sophisticated education and outreach programme came following 2002 when the UK’s National Heritage Act extended the powers of the Historic Buildings and Monuments Commission to encompass underwater archaeology within UK territorial waters for the first time. This coincided with a levy on aggregate extraction in territorial waters that provided funds for maritime research. In turn, this provided a source of funding for extended education and outreach programmes. A successful application by the HWTMA resulted in a range of teaching resources, activities and educational books aimed at young children aged between 7 and 11. The educational resources were taken to schools where interactive teaching aids were framed around the stories of shipwrecks and drowned lands. The courses included global issues including pollution, rising sea level and geography. Science and survey was interwoven into projects that linked directly to the teaching curriculum while the subject matter was constructed around familiar events to provide context within which the children could identify.

The education and outreach programme was supported by detailed research and complemented by academic publications that ensured the source material was at the forefront of current thinking. This was exemplified in a European project where international teams joined to investigate submerged archaeological sites. The results were translated into three languages and taught in schools from each nation who interacted through the internet with web based education tools. In the UK, a travelling maritime bus has been created to access schools and more remote environments. Here it has been used to provide a tangible teaching resource. The vivid display and dynamic teaching methods used have proved particularly effective at engaging with more challenging pupils and groups.

I would argue that an understanding of ones historical background gives people a connection with the past. It takes time for society to form, and while doing so, the story of its evolution is archived in its history and material remains. Reference to this resource can embellish lives by providing a longer term link with the historic environment and engendering a sense of place in a community. This breeds collective self confidence and a civic pride that is the bedrock of any stable society. In the current times of uncertainty the need for secure social cohesion is becoming ever more important and strong anchors to the past can provide a grounding that binds people together. These are the foundations that need to be laid if we hope to get common respect for our place and each other. All too frequently we see that people are more ready to do harm to those from whom they feel excluded and distant rather than members of their own community. I would advocate that public historical and archaeological education is a tool that can make the past accessible to a wide audience of people who would otherwise not be reached. Yet, if we do not read that record we cannot learn from it and understand the present – not to mention that we would be less able to learn from our mistakes.

As the current economic climate worsens, available funding from public sector sources is focusing more and more on statutory requirements. In the UK, support for public archaeology is not statutory and as such does not qualify for mandatory funding. However, as it is education, it is taken for granted by the public in the UK who expect the state to pay for it. As it is not mandatory, civic authorities do not cover the costs. So despite the improved profile we have seen over the last decade, public archaeology is now facing its greatest challenges.

Many excellent tools and delivery methods have been developed on both sides of the Atlantic since the turn of the centaury. Public enthusiasm exists but it remains somewhere in the ‘not quite ready to pay’ zone on the fringes of popular culture. The same applies to civic leaders who like to be affiliated when they can afford it but seldom recognise the deeper social benefits that underlie the subject. The issue now is one of sustainability. Should we look to communities at ground level to help fund activities they will be involved in? Should we pursue support from the public purse? Should we persuade commerce and industry that they would benefit from supporting the sector?

I fear we will not achieve long term sustainability unless high level decision makers can fully appreciate the value of history and archaeology. So, SHA members, how are we going to achieve that? 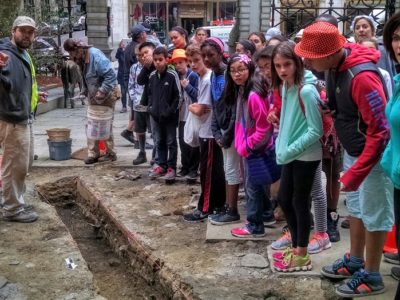 Urban Public Archaeology, or, What to Expect When You’re Expecting a Million Visitors
By Sarah JohnsonArchaeology in a densely populated urban environment is an entirely different animal from…