Every year on the last Saturday of the Society’s annual meeting we open our doors to the public, in one form or another.  Since the 1996 annual meeting in Cincinnati some Public Days have taken place at historical sites, museums, or ballroom of the conference venue.  For the 2013 Public Day the University of Leicester opened its student union, lecture hall, and common grounds for the benefit of the community.  And come they did!  Hundreds of people swarmed in the disco-turned-expo hall on two floors—people upstairs in period dress and info tables, activities for all ages celebrating all the senses down below—while others participated in a metal detector demonstration on the lawn, and others still attended lectures in the auditorium. 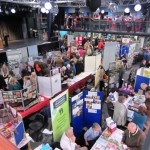 As SHA’s Public Education and Information Committee (PEIC) chair, I feel a duty to attend and support the local chairs. But let’s be honest, I also attend to beg/borrow/steal outreach ideas.  It was painful to narrow to a manageable amount, but here are my top ten take-aways:

The day was a success, both from the quantitative measure of public served (2,000+ estimated) and from a professional development measure.  In fact, we already “stole” the seed activity and put it to practice at a recent science activity day in northeast Florida!  Congratulations to the Public Chairs and local committee.  And thank you to the University of Leicester that did an excellent job in cross promoting the conference and public day to visitors of all walks.

For more pictures and comments from the actual day, check out the Facebook event page: http://www.facebook.com/events/403052999760928/

Tagged with: Archaeology Day, Leicester, PEIC, SHA2013
Related Posts
Carry the One: Archaeology Education at a Math Teachers’ Conference
“Ooh! I need this! I’m teaching my kids about this soon. This one too!” The…
New Thematic Issue of Historical Archaeology: The Mardi Gras Shipwreck Project
During the summer of 2007, detailed mapping and archaeological excavations were conducted at the Mardi…
Learning Public Archaeology: Experiences and Challenges from a University-Based, Long-Term Initiative
The Fort St. Joseph Archaeological Project has been a public archaeology/community service learning program from…