‘What are your hopes and fears for the future of archaeology?’

The Archaeologists Anonymous team are coming to the SHA conference and will be holding a panel session on the morning of Friday 11th January. In the run-up to the conference we’d like to invite all SHA delegates to send us your hopes and fears on a postcard and make the panel session a success! 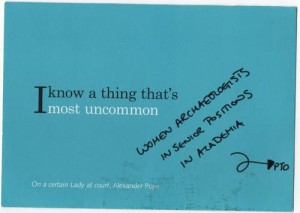 How to get involved

The process is a simple one. You need to find a postcard, adapt its front cover somehow, and write your message (anonymously) on the back, and then post it to the address on the Arch Anon blog

Your postcard will join the other postcards we’ve received and will be prominently displayed on the blog – these postcards will form the basis for discussion points during the SHA panel. Your postcard could therefore lead vibrant debate regarding the future of archaeology during the 21st century at SHA: an important, international conference. 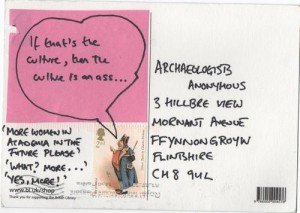 We want to slow down the immediacy of digital communication and through regressive creativity provide an alternative to the fast-paced and hyper-identified world of Twitter, Facebook and email. We want to provide an opportunity for you to make something and use hand-writing rather than create through the technology of a laptop. Joining in will take a little time. You’ll need to find the ‘right’ postcard, think of your message and post it to us but we hope you’ll agree that the method is worth it. The postcards we’ve received are individual, striking and thought-provoking. 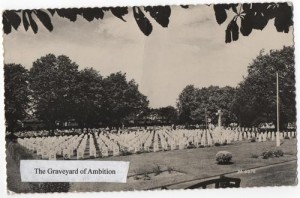 We also recognise the growing interest in postcards within the archaeological community. Sian Jones’ recent paper at CHAT in York considered the ways in which postcards from Whitworth Park in Manchester operated ‘as material objects’ whether ‘mass-produced, commoditized, personalised, exchanged and consumed’.

We are asking for contributors to send postcards anonymously as we want the message on the postcard to be more important than who is saying it. We are hoping that anonymity will allow the voices of undergraduates to be undifferentiated from the voices of professors. We are interested in all voices: whoever you are we would like you to send us your hopes and fears postcard. 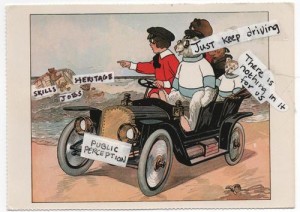 The panel at SHA

The panel will draw on the postcards we’ve received to discuss the future direction of the discipline, the Arch Anon project, and the interconnections between anonymity and academia. 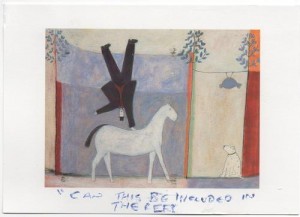 We are pleased that Katrina Foxton will be joining the SHA panel. Katrina’s recent work has focused on a specific collection of Victorian photographic postcards produced by Francis Frith (1822-1898), who took up the task of photographing every landscape and landmark in England during the 1860s. Looking at his work both in physical form and on the internet, Katrina’s work on postcards has considered how both the discursive aspects of the image content (including the achievement of a standardised way of obtaining that ‘perfect shot’, which is dependent on the material form and commercial success of the postcard) can lead to an understanding of postcard ‘culture’ and heritage today. Moreover, the prolific use of postcards in their hey-day has been likened to an early form of twitter (Staff 1979, Woody 1998, Procheska and Mendelson 2010). 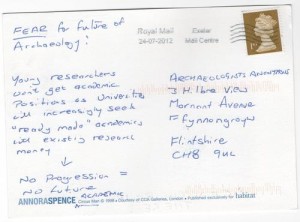 Therefore, she is interested in the more recent mobilisation of these multi-dimensional photo-objects (Edwards and Harts 2004, Gillen and Hall 2011) within this particular archaeological debate, as it points to a further evolution in the postcard’s cultural life and its status as a epistolary medium.

We’re looking forward to hearing what Katrina has to say about Archaeologists Anonymous!

Can I bring a postcard along on the day?

We’d love you to be involved but we really want to have a stamp on the postcard so we can tell which countries the postcards have come from. And we really don’t want to know who’s made them. So please do post yours in time for SHA.

Send us an email  – archaeologistsanonymous@gmail.com

See you in Leicester!