As a professional organization, the Society for Historical Archaeology promotes the participation of student members and supports the advancement of their careers. Students, in turn, may see the SHA as a resource in their professional development. One way the SHA encourages student participation in the annual meeting is through the Ed and Judy Jelks Student Travel Award, discussed on the SHA blog by both Paul Mullins and Charlie Ewen. Graduate students may apply for the $500 award to defray the cost of travel when presenting research at the annual conference.

What kind of students and research win the award? Mullins concisely described the work of last year’s two recipients and we were curious to learn a little more about Corey McQuinn and Adrian Myers as students. We interviewed McQuinn and Myers and the following is a summary of their responses.

Corey McQuinn, a master’s student concentrating in Historical Archaeology at the University of Albany, researches enslavement in the Northeast, an understudied topic. He examines the Mabee Farm in Rotterdam, New York, and how different archaeological models of enslavement and racialization apply to the Northern context. Through another project focused on the Underground Railroad in Albany, New York, he studies how the construction of a community that supported the Underground Railroad relates to New York’s earlier history as a slave state and its continued economic dependence on enslaved labor corps.

In addition to this academic research, as a project manager for the cultural resource management firm Hartgen Archaeological Associates, Inc., McQuinn says he must be flexible and cover a broad range of time periods and historic contexts. He has worked in a variety of historical contexts, including cemetery excavations, tavern sites, Shaker village sites, farmsteads and industrial contexts. He has also helped to run Hartgren’s youth archaeological field school summer programs, getting students involved in community archaeology.

The Ed and Judy Jelks Travel Award helped McQuinn attend his first SHA conference, where he presented a paper, met other professionals in his field, including authors of papers and books he has read. A highlight of the conference was getting to know people and learning about work in progress. He finds both the annual conference and quarterly newsletter valuable resources for identifying potential partnerships and opportunities in the future.

Though his three kids, Remember, Beatrix, and Jasper, are his greatest successes, McQuinn also received the New York Archaeological Association’s William Beauchamp Student Award in 1998 and the 1997-1998 Dana Student Internship Grant from Ithaca College. He is looking forward to completing his master’s thesis next semester and his PhD in the future.

Myers excavating at the PoW camp in Manitoba.

A PhD candidate at Stanford, Adrian Myers, learned of the Ed and Judy Jelks Travel Award through attending the SHA conference, SHA business meetings, and from the HISTARCH email listserv. The award enabled him to present a paper, “Dominant Narratives, Popular, Assumptions, and Radical Reversals in the Archaeology of German Prisoners of War in a Canadian National Park” in the session chaired by Michael Roller and Paul Shackel, “Reversing the Narrative.” The paper was about all the surprising and counterintuitive things he encountered while studying the history of Nazi soldiers in a prison camp in Canada during World War II. Long interested in the history of the Second World War, his dissertation research is a historical archaeological study of a prison camp in Manitoba, Canada. Over three seasons of work he and colleagues surveyed, mapped, and excavated portions of the camp. Myers also travelled to Germany and met with three men who had been prisoners of the camp.

Myers has participated in a variety of other projects, including the “Van Project” at the University of Bristol, the Stanford Gymnasium Dig, and Bonnie Clark’s field school at the Granada Relocation Center, a World War II Japanese internment camp in Colorado. He also used free Google Earth imagery to map the US military prison at Guantanamo Bay, assembled and co-edited a book on archaeology and internment camps, did a study on 20th century porcelain electrical insulatorsand also manages to work part-time in CRM archaeology.

Also a recipient of the National Geographic Society Waitt Grant (2009), Myers suggests undergraduate students pursue ideas for projects, even if it seems impossible and incredibly far off, especially if they are passionate about the subject. He suggests finding a supportive graduate program and, with effort the research can probably be done. He also says having an awesome adviser helps.

Both McQuinn and Myers sound passionate about their research and actively pursue opportunities to participate in projects and make connections with their peers in historical archaeology. They recognize the SHA as a resource for students and advise them to participate in the organization by speaking or corresponding with other archaeologists and presenting at conferences. The Academic and Professional Training Student Subcommittee (SSC) is starting a group discussion on student professionalism and the Society for Historical Archaeology. Please become a member of the conversation by joining the SSC Yahoo! group. Email your request to JCoplin@gc.cuny.edu and include your email to join.

We look forward to hearing from you! 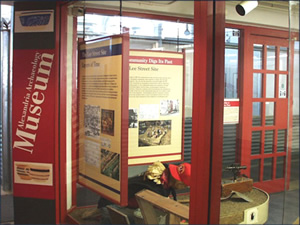 5 Archaeological Things to See and Do in Washington D.C.
Remember, the last day to submit your #SHA2016 conference abstract is June 30th, 2015. See…