The last decade has seen a huge growth in writing about public archaeology – of all sorts. Happily, much of the recent writing has moved beyond the very descriptive, somewhat celebratory accounts which appeared throughout the 1990’s. These earlier accounts were a useful way of sharing strategies, ideas, and encouragement as archaeologists began to better understand the intersections between archaeological agendas and diverse “public” ones. Over time, and concurrent with recent efforts to decolonize archaeological practice, the “prime mover” for public archaeology work has moved well past “just” promoting stewardship, into arenas which are more self-critical, reflexive, and analytical. This is to be expected as any specialty matures and is a positive development.

One area that remains less explored, however, is how all of this laudable and sometimes even “activist” public archaeology work plays out in the long run. Traditionally, archaeologists (and arguably, all anthropologists) have tended to think of our work in terms of this or that “project”. The assumption, implicit or otherwise, is that our projects are likely to have a beginning, a middle, and an end. We start our work (either on our own or at the behest of a community), we find ways to pay for it (or we do it for free), we work to create community alliances, interest, and networks…and then what? What do we do when the excavations end? Or, what do we do when we have a new project that beckons?

Obviously the answer to this varies, but the point is that public archaeologists cannot, usually, simply write their reports, pack up their trowels and move on to the next project. Doing this is difficult in part because of the personal relationships that we develop in order to do the work. It is especially difficult if part of our work has been to develop processes for moving the work forward – especially development and administrative processes, such as fundraising, program development, minute-taking, meeting-arranging, and the like. That is, we sometimes call “administrivia” is not trivial at all. I suspect that many successful, engaged, and productive community / collaborative / participatory projects begin a downward path the first time that someone important fails to be invited to a meeting, thanked for a donation, or otherwise taken care of administratively. Or, even more important, when funding cannot be obtained to keep the post-excavation work going – the outreach, the oral history interviews, the kids’ programs, the museum displays, etc. Often these things are done, during a project’s heyday, by the public archaeology person who is trying to generate interest, get local input and publicity – and, to meet their own agendas, gather data. Local community groups usually have few resources to fund this work as paid work, and if/when the archaeologist leaves, it is all too easy for the work itself to falter.

It is true, of course, that these concerns are often more important to archaeologists than to communities themselves – as my colleague Patti Jeppson pointed to me when she read this draft (she allowed me to share it here to help generate blog discussion). Jeppson noted that in her experience public archaeology is part of a “community’s historical trajectory (with archaeology dipping in and out rather then ending)”. I agree, and would just say that, like everything else, each context and situation are different. In my experience, the public archaeologist often takes on the “Initiator” role (described in the literature about “participatory action research” – see Stoecker 1997). When acting as “Initiators”, the archaeologist comes up with a research or project idea and invites the community to participate – and keeps the process going, as described above. Other potential roles would be the “Consultant”, in which the community commissions the research and the academic is accountable to it, and the “Collaborator”, which would be the ideal. In this last scenario the community would be driving the research, including partnering to formulate research questions, analyze results – and keeping the process moving. Chip Colwell-Chanthaphonh and T. J. Ferguson described something similar in their discussion of a “collaborative continuum” (Colwell-Chanthaphonh and Ferguson 2008). The idea is that all collaborative projects fall at one point or another on this sort of continuum, and their location on it can shift over time, or as different players become involved.

The dilemma I am concerned with here reflects my current experience with two different projects, in which local community groups, consciously positioned as “in charge”, still rely on me to keep the sort of processes I described above going. This has happened to varying degrees in each – there are some key community people who do continue to function as full partners in the work, and to drive much of it. The reality is, however, that during periods of time where I am less active, forward movement tends to slow, or sometimes stop. Because we are partners, we have had conversations about this, and together are asking the following sorts of questions:

• Do some public/collaborative efforts simply have a life cycle?
• To what extent should “capacity building” be a part of what public archaeologists do – for some sorts of projects?
• How do we (or should we?) devise ethical exit strategies from projects which have reached either a natural or unnatural end, or in which our work is no longer effective, or even just when we reach a point of wanting (or perhaps, needing, for our own professional or personal well being) to move on?
• How do issues about “sustainability” play into the decisions that we and the local communities we work with make?
• How can projects sustain themselves in the face of contemporary financial challenges and the evolving interests and skillsets of individual professional and local collaborators?

I do not have the answers to these questions, and welcome further ideas and potential solutions.

Stoecker, R.
1997 Are Academics Irrelevant? Roles for Scholars in Participatory Research. Paper presented at the 1997 meetings of the American Sociological Society. A revised version was published in the American Behavioral Scientist, Vol . 42, No. 5, 1999., page 840-854. The Conference version is available online at http://comm-org.wisc.edu/papers98/pr.htm

Tagged with: archaeology, community, engagement, public archaeology
Related Posts
Too Historic To Fail
Have you had an opportunity to read the latest chapter in the depressing Carter’s Grove… 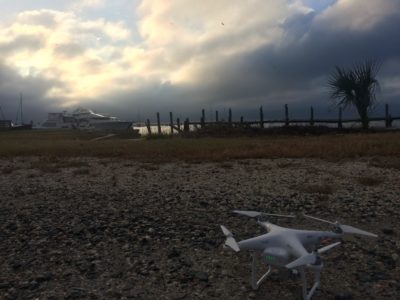 Your First Drone: Basic Considerations and Best Practices for Drone Use in Public Outreach
Kevin Gidusko, Florida Public Archaeology NetworkImage 1 The FPAN drone, Boas I, gets ready for flight.…
Why historical archaeology should pay attention to the Occupy movement
Occupy and its offspring have brought issues that are of intrinsic interest to our discipline…